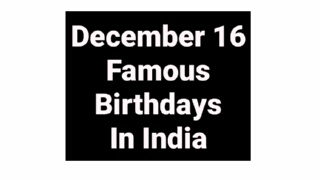 Harshdeep Kaur is an Indian playback singer known for her Sufi songs. Harshdeep Kaur was born on 16 December 1986 in a Sikh family in Delhi and inherited music from her father, Savinder Singh, who owns a factory of musical instruments. Apart from studying, she started learning music at the age of six. She learnt Indian Classical Music from Mr.

Jyoti Amge (born December 16, 1993), a resident of Nagpur, India, is currently the world's smallest woman according to the Limca Book of Records and Guinness Book of Records. A documentary featuring Amge was broadcast in the United Kingdom on Channel 4 on June 11, 2009 at 21:00 called BodyShock: Two Foot High Teen. As of December 16, 2011, on her 18th birthday,

Anjali Abrol (16 December 1990) is an actress. She was born and brought up in jammu Jammu and Kashmir. Anjali plays a servant who falls in love with a prince in the series Raja Ki Aayegi Baraat (TV series)

Thotta Tharani is an Indian film art Director and production designer who has worked in Tamil cinema, Telugu cinema, Malayalam cinema and Bollywood. Thota Tharani has been involved in the art of set design since he was just twelve when he helped his father. His work was very much appreciated in films such as Nayagan, Indian and Sivaji, all the three films fetched him a National Film Award.

Dr. Nabi Bux Khan Baloch (December 16, 1917 – April 6, 2011) was a scholar of the Sindhi, Persian, Arabic, and Urdu languages. He has written many books on Sindh's History, and about 42 volumes on Sindhi Folklore. In addition, he has compiled and published Sindhi dictionary in five volumes—which has lately been revised in three volumes.

Gaurav Dhiman (Born, 16 December 1986, in New Delhi) is one of the most experienced players in the India U19 World Cup squad, having played 18 matches and making his debut in February 2004. He is the premier allrounder in the India squad, bowling right-arm medium-pace and batting right-handed. He had played for India Under-15s and now plays for India Under-19s, Karnataka Under-19s.

Thomas Barkley Raikes (16 December 1902 – 2 March 1984), often known as Tom, was an Indian-born English cricketer who played 38 first-class games for Oxford University in the 1920s. He also played minor counties cricket for Norfolk. He was educated at Winchester College, and in 1921 had a particularly fine year: he captained the side,

Adyar K. Lakshman (born 1933) is a noted Indian Bharatnatyam dancer, choreographer and guru. Born on 16 December 1933, Adyar K. Lakshman hails from Kuppam in Chittoor district of Andhra Pradesh. His father, Krishnaraja Rao, was posted there as a school teacher. Shri. Lakshman and his brother Shri. Rama Rao were discovered at a young age by Shri. P.D. Doraiswamy Iyer, a representative of Smt.

Nawab Singh Chauhan (16 December 1909 – 4 April 1981) was an Indian politician. He was member of 6th Lok Sabha from the Aligarh constituency. He used the pen name "Kanj". Chauhan was born in the village Jawan Vajidpur but he lived at Jawan Sikandarpur , district Aligarh, to father Thakur Bulwant Singh and mother Haripiari Devi, and was educated up to intermediate level.

Madhurendra Kumar Singh senior leader of Bihar Congress, born on 16 December 1953, into one of the most prominent political family of Bihar, India, who were part of the freedom movement and members of the Indian National Congress. His father, Thakur Jugal Kishore Sinha, was the Member of the first Lok Sabha, his mother Smt. Ram Dulari Sinha, was the union minister and governor of Kerela.

Dawa Narbula (born 16 December 1935) was a member of the 14th Lok Sabha of India. He represented the Darjeeling constituency of West Bengal and is a member of the Indian National Congress (INC) political party.

 Ludwig van Beethoven 17 December 1770 – 26 March 1827) was a German composer and pianist. A crucial figure in the transition between the Classical and Romantic eras in Western art music, he remains one of the most famous and influential of all composers. Born in Bonn, then the capital of the Electora.

Krysten Alyce Ritter (born December 16, 1981) is an American actress and former model. Ritter is well known for her role as Jane Margolis on AMC's Breaking Bad, where she first appeared as the property manager and neighbor of Aaron Paul's Jesse Pinkman. She has appeared in the films Confessions of a Shopaholic (2009), What Happens in Vegas (2008),

William Melvin "Bill" Hicks (December 16, 1961 – February 26, 1994) was an American stand-up comedian, social critic, satirist, and musician. His material largely consisted of general discussions about society, religion, politics, philosophy, and personal issues. Hicks' material was often controversial and steeped in dark comedy. In both his stand-up performances and during interviews,

Anna Katherine Popplewell (born 16 December 1988) is an English film, television and theater actress. She is best known for her role as Susan Pevensie in The Chronicles of Narnia film series since 2005. Popplewell, eldest of three children, is the daughter of Andrew Popplewell and Dr. Debra Lomas, a dermatologist. She was born in London. She has two younger actor siblings:

Miranda Otto (born 16 December 1967) is an Australian actress. The daughter of actors Lindsay and Barry Otto and the sister of actress Gracie Otto, she began acting at age eighteen, and has performed in a variety of independent and major studio films. Her first major film appearance was in the 1986 film Emma's War, in which she played a teenager who moves to Australia