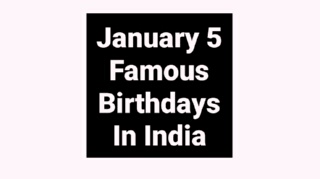 Deepika Padukone (born 5 January 1986) is an Indian actress and a former model. She appears mostly in Hindi as well as Tamil and Kannada language films. Born to badminton player Prakash Padukone, she chose to become an actress and not pursue a career in sports. Padukone made her acting debut in the 2006 Kannada film Aishwarya. The following year, she made her Hindi film debut in Om Shanti Om.

Mansoor Ali Khan or Mansur Ali Khan sometimes M. A. K. Pataudi (5 January 1941, Bhopal – 22 September 2011, New Delhi), nicknamed Tiger Pataudi, was an Indian cricketer and former captain of the Indian cricket team. He was the ninth Nawab of Pataudi until 1971, when India abolished royal entitlements through the 26th Amendment to the Constitution of India.

Mamata Banerjee (born 5 January 1955) is the 11th and current Chief Minister of West Bengal. She is the first woman to hold the office. Banerjee founded the party All India Trinamool Congress (AITMC or TMC) in 1997 and became its chairperson, after separating from the Indian National Congress.

Uday Chopra (born 5 January 1973) is a Bollywood actor, producer, and assistant director. He is the son of Yash Chopra and brother of Aditya Chopra, and worked as an assistant director on a number of his father's and brother's movies under the Yash Raj Films banner. In 1994, he produced Yeh Dillagi starring Akshay Kumar, Kajol and Saif Ali Khan.

Jessica Lal (1965–1999) was a model in New Delhi, who was working as a celebrity barmaid at a crowded socialite party when she was shot dead at around 2 am on 30 April 1999. Dozens of witnesses pointed to Siddharth Vashisht, also known as Manu Sharma, the son of Venod Sharma, a wealthy and influential Congress-nominated Member of Parliament from Haryana, as the murderer.

Sreekumar Achary, better known by his stage name Jagathy Sreekumar, is an Indian film actor who has performed in more than 1,000 Malayalam films. He has also directed two films and has written screenplays for two films. His stage name is derived from the neighbourhood of Jagathy in Thiruvananthapuram, from where he hails.

Paramahansa Yogananda (January 5, 1893 – March 7, 1952), born Mukunda Lal Ghosh, was an Indian yogi and guru who introduced many westerners to the teachings of meditation and Kriya Yoga through his book, Autobiography of a Yogi. Yogananda was born in Gorakhpur, Uttar Pradesh, India to a devout family.

Manish Sisodia (born 5 January 1972) is an Indian social activist, recognized for being a key member in the 2011 Indian anti-corruption movement and Team Anna. Formerly a news producer at Zee News, Manish is an active RTI activist. He is the co-founder of Kabir and with Arvind Kejriwal started "Public Cause Research Foundation," NGOs aimed at creating awareness about Indian laws.

Arjun Munda (born 5 January 1968 in Khrangajhar Jamshedpur) is an Indian politician, former Member of Parliament to the 15th Lok Sabha. He resigned the 15th Lok Sabha membership on 26 February 2011, and is currently Chief Minister of Jharkhand. After schooling in a local school he has done his Diploma in Social Science from Indira Gandhi National Open University.

"Mukri" (5 January 1922 – 4 September 2000) was born as Muhammad Umar Mukri in 1922 in Alibagh. He started his film career from film "Pratima" along with notable Indian film actor Dilip Kumar in 1945. Mukri with his toothless smile, diminutive stature and perfect humor timing amused the audiences in more than 600 films, over six decades in Bollywood.

Murli Manohar Joshi (born 1934) was the Union Human Resources Development minister of India in the NDA government. Joshi is a leading member of the Bharatiya Janata Party. He is best known for his views on Indian socio-politics and for his affiliation with the RSS. He was born in Nainital on 5 January 1934.

Sushil Kumar Modi (born 5 January 1952) is an Indian politician from the Bharatiya Janata Party and is the current Deputy Chief Minister and Finance Minister of Bihar, India. He is a lifelong member of the Rashtriya Swayamsevak Sangh. He was recently appointed the Chairman of the Empowered Committee of State Finance Ministers for the Implementation of Goods and Service Tax.

K. S. R. Das (5 January 1936 – 8 June 2012) or Doss was an Indian film director and editor. He had directed many blockbuster films in many South Indian language films, primarily Telugu and Kannada films. He was born on 5 January 1936. He worked for about 40 films in different positions.

Ramaya Muttusamy (January 5, 1926 – June 27, 1988) was a prolific Sri Lankan music director and singer. He handled the music for most of K. Gunaratnam's productions. Muttusamy was born on January 5, 1926, in Nagercoil, Tamil Nadu, India the only son of virtuoso Malayali musician Ramaya Baghwather.

Kevin Damien Keelan MBE (born 5 January 1941) is a former Careeral football goalkeeper. He spent the majority of his career with Norwich City, though he also played for Stockport County, Wrexham, New England Tea Men and Tampa Bay Rowdies. Born in India to a British soldier stationed in Calcutta, Keelan returned to England, settling in Kidderminster with his family, when he was seven.

Susmita Bauri (born 5 January 1975) is an Indian politician and has been elected on a CPI(M) ticket from the Bishnupur (Lok Sabha constituency) in the Indian state of West Bengal to the 14th and 15th Lok Sabha. Daughter of Nimai Charan Bauri and Sandhya Bauri, she is a Ll.B. from Hazra Law College of Calcutta University.

Bradley Charles Cooper (born January 5, 1975) is an American film, theater, and television actor. He is known for his roles in the films The Hangover, The A-Team, Wedding Crashers, and Limitless. In 2011, People magazine named Cooper "Sexiest Man Alive". Cooper was born in Philadelphia, Pennsylvania, and grew up in nearby Jenkintown, Pennsylvania.

Joel Thomas Zimmerman (born January 5, 1981), better known by his stage name deadmau5 (pronounced "dead mouse"), is a Canadian house music producer and performer based in Toronto. Deadmau5 produces a variety of styles with the house genre, or other forms of electronic dance music.

Hayao Miyazaki (born January 5, 1941) is a Japanese manga artist and prominent film director and animator of many popular anime feature films. Through a career that has spanned nearly fifty years, Miyazaki has attained international acclaim as a maker of animated feature films and, along with Isao Takahata.

January Kristen Jones (born January 5, 1978) is an American actress. She is best known for playing Betty Draper on Mad Men. Jones was born and raised in Sioux Falls, South Dakota, the daughter of Karen, who manages a sporting goods store, and Marvin Jones, a coach, gym teacher, and fitness director. She is named after January Wayne, a character in Jacqueline Susann's Once Is Not Enough.

Diane Keaton (born Diane Hall; January 5, 1946) is an American film actress, director, producer, and screenwriter. Keaton began her career on stage, and made her screen debut in 1970. Her first major film role was as Kay Adams-Corleone in The Godfather (1972), but the films that shaped her early career were those with director and co-star Woody Allen beginning with Play It Again.

Robert Selden Duvall (born January 5, 1931) is an American actor and director. He has won an Academy Award, two Emmy Awards, four Golden Globe Awards and a BAFTA over the course of his career. A veteran actor, Duvall has starred in some of the most acclaimed and popular films and TV shows of all time, among them The Twilight Zone, The Outer Limits.

Kristin Elizabeth Cavallari (born January 5, 1987) is an American television personality and actress of Italian origin. She is best known for her starring roles on the former MTV reality television programs Laguna Beach: The Real Orange County and its spin-off, The Hills. Cavallari was born in Denver, Colorado, the second of two children of Judith Spies (née Eifrig) and Dennis Cavallari.

Vincent Peter "Vinnie" Jones (born 5 January 1965) is an English actor and retired footballer. Born in Hertfordshire, England, Jones represented and captained the Welsh national football team, having qualified via a Welsh grandparent. As a member of the "Crazy Gang", Jones won the 1988 FA Cup Final with Wimbledon.

Clarence J. "Clancy" Brown III (born January 5, 1959) is an American actor and voice actor. He is known for his roles in live action as The Kurgan in the cult classic film Highlander, Byron Hadley in the award-winning The Shawshank Redemption, Brother Justin Crowe in HBO's critically acclaimed Carnivàle, Career Sergeant Zim in Starship Troopers and the killer Steve in Shoot to Kill.

Juan Carlos I of Spain

Juan Carlos I born 5 January 1938) is the reigning King of Spain. On 22 November 1975, two days after General Franco's death, Juan Carlos was designated King according to the law of succession promulgated by Franco. In 1969, when Franco named Juan Carlos as the next head of state, Spain had had no monarch for 38 years.

Oscar Isaac (born January 5, 1980) is an American actor and singer. Isaac was born in Guatemala to a Guatemalan mother, Maria, and a Cuban pulmonologist father, Oscar Gonzalo Hernández. He was raised in Miami, Florida. While in Miami, he played lead guitar and sang vocals for his band "The Blinking Underdogs".