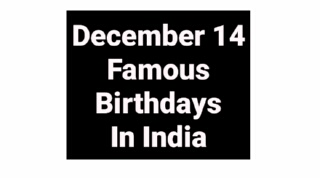 
Ranbirraj "Raj" Kapoor 14 December 1924 – 2 June 1988), also known as The Show-Man, was an Indian film actor, producer and director of Hindi cinema. He was the winner of nine Filmfare Awards in India, and a two-time nominee for the Palme d'Or grand prize at the Cannes Film Festival for his films Awaara (1951) and Boot Polish (1954).


Sanjay Gandhi (Hindi: संजय गाँधी ) (14 December 1946 – 23 June 1980) was an Indian politician. The younger son of Prime Minister Indira Gandhi and Feroze Gandhi, he was a member of the Nehru-Gandhi family. During his lifetime he was widely expected to succeed his mother as head of the Indian National Congress, but following his early death in a plane crash his older brother Rajiv.


 Sameera Reddy  Samīrā Reḍḍi ; born 14 December 1982 is an Indian actress who primarily appears in Bollywood and Kollywood films. Apart from Hindi and Tamil, she has also appeared in a number of Telugu, Bengali and Malayalam films. Reddy was born in eletipadu near tanuku , Andhra Pradesh.


Rana Daggubati better known as Rana, is an Indian film actor and producer. He made his acting debut with the Telugu film Leader. The film, written and directed by Sekhar Kammula, hit the theatres on 19 February 2010, and became an instant success, gaining Rana Filmfare Award for Best Male Debut – South. He was born on 14 December 1984 in Chennai, Tamil Nadu.


Juhi Parmar (Hindi: जूही परमार; born 14 December 1980 in Ujjain), daughter of Devendra and Hemlata Parmar, brought up in Jaipur in Rajasthan is a well known TV personality and a versatile anchor, actress, Television Presenter, singer and dancer. She is also the winner of fifth season of the reality television show aired on Colors TV. Big Boss. Juhi Parmar is married to Television personality.


Aadhi (born 14 December 1982 as Sai Pradeep Pinisetty) is an Indian film actor, who has mainly appeared in Tamil films. He debuted in the 2006 Telugu film Oka Vichitram, and made his big break with S. Shankar's 2009 film Eeram. His father, Ravi Raja Pinisetty has directed 56 films. After completing B.E. in computer science, Aadhi had applied for pilot training as he was interested in touring.


Divyanka Tripathi is an Indian television actress most popular for her role in Banoo Main Teri Dulhan. Divyanka Tripathi was born and brought up in Bhopal. She is an Indian Television actress from Bhopal. Her father is a pharmacist. Divyanka started her career as a model. She was the winner of the 2005 Miss Bhopal contest. She participated in Zee's Teen Contest and won the Miss Beautiful skin title.


Biswajit (full name Biswajit Deb Chatterjee, Hindi: बिस्वजित चॅटर्जी, is a Bengali/Hindi actor. He was born in Calcutta, West Bengal on 14 Dec 1936 and later went to Bombay to do some memorable Hindi films. After a couple of hit films in Calcutta like Mayamrigo (1960) and Dui Bhai (1961), Biswajit went to Bombay. In 1962.


Vijay Amritraj  born 14 December 1953) is a former Indian tennis player, sports commentator and actor. Vijay was born in Chennai, India to Maggie Dhairyam and Robert Amritraj. He and his brothers, Anand Amritraj and Ashok Amritraj, were among the first Indians to play in top-flight international tour tennis. They did their schooling in Don Bosco Egmore, Chennai.


Biplab Samantray (born December 14, 1988 in Cuttack) is an Orissan cricketer. He is a right-handed bowler and middle order batsman. In first class cricket, he plays for Orissa in Ranji Trophy and Katak Barabati Tigers in Odisha Premier League. He plays for Deccan Chargers in the IPL. He also recently played for the East zone team which won its first ever Duleep trophy.


Syed Rahim Nabi (born 14 December 1985) popularly known as Nabi is a versatile player who can play in all of the outfield positions. He plays for Mohun Bagan A.C. in club level and represents India internationally. A product of the Tata Football Academy, Nabi is easily the most versatile player in the current senior setup of the Indian team. He started his career playing as a striker.


Vanessa Anne Hudgens (born December 14, 1988) is an American actress and singer. Hudgens rose to prominence playing Gabriella Montez in the High School Musical series. Hudgens also has appeared in several television programs including Quintuplets, Still Standing, The Brothers García, Drake & Josh, and The Suite Life of Zack & Cody. In 2009, she earned critical acclaim for her role in the film Band.

George VI of the United Kingdom


George VI (Albert Frederick Arthur George; 14 December 1895 – 6 February 1952) was King of the United Kingdom and the Dominions of the British Commonwealth from 11 December 1936 until his death. He was the last Emperor of India, and the first Head of the Commonwealth. As the second son of King George V.


Michel de Nostredame (14 or 21 December 1503 – 2 July 1566), usually Latinised to Nostradamus, was a French apothecary and reputed seer who published collections of prophecies that have since become famous worldwide. He is best known for his book Les Propheties (The Prophecies), the first edition of which appeared in 1555. Since the publication of this book


Michael James Owen (born 14 December 1979 in Chester) is an English professional footballer who is currently a free agent after being released by Manchester United in June 2012. The son of former footballer Terry Owen, Owen began his senior career at Liverpool in 1996. He progressed through the Liverpool youth team and scored on his debut in May 1997. In his first full season in the Premier League.