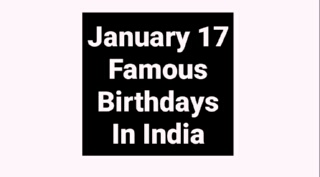 Riteish Deshmukh (born 17 December 1978, in Mumbai, Maharashtra) is an Indian actor and architect who appears in Bollywood films. He is the son of Vilasrao Deshmukh, the Union Minister for Science, Technology and Earth Sciences, Government of India, and the former Chief Minister of Maharashtra. Deshmukh debuted with K. Vijaya Bhaskar's Tujhe Meri Kasam (2003) with his later to be wife Genelia D'

Jayasudha is an Indian film actress-turned-MLA for the Congress in Secunderabad. She was a famous South Indian actress from the 1970s and 1980s, with most of her films being Telugu films. She has also worked in Tamil, Kannada, Malayalam, and three Hindi films. Jayasudha was born as Sujatha in Madras, Tamil Nadu on 17 December 1958 to a Telugu speaking family.

Suresh Oberoi, born as Vishal Kumar Oberoi on December 17, 1946) is an Indian character actor who is also father of Bollywood actor Vivek Oberoi. He was born in Quetta, now Pakistan and is a recipient of 1987 National Film Award for Best Supporting Actor. After Partition of India his parents Anand Sarup Oberoi and Kartar Devi fled to Amritsar and then to Hyderabad. He has made over 135 films.

Khanzada Mirza Khan Abdul Rahim Khan-e-Khana (17 December 1556 – 1627) (Hindi: अब्दुल रहीम ख़ान-ए-ख़ान, also known as Rahim  is a renowned composer during the time of Mughal emperor Akbar. He was one of the main nine ministers (Diwan) in his court, also known as the Navaratnas. Rahim is famous for his Hindi couplets and his books on Astrology.

Sachin Shroff (born December 17, 1979) is a businessman and a well known TV personality. He is a versatile actor, anchor and dancer. He played Gyan in Har Ghar Kuch Kehta Hai and Arjun in Naaginn. Other appearances include Sinndoor Tere Naam Ka, Saat Phere, Naam Gum Jayega, Shagun, and Vishwas. Sachin Shroff has worked in the following television series:

Dinesh C. Paliwal (born 17 December 1957 in Agra, India) is Chairman, President and Chief Executive Officer of Harman International – a leading provider of premium audio and infotainment systems for the automotive, consumer and professional markets. Dinesh, a US citizen, has lived and worked in Australia, China, India, Singapore, Switzerland, and the United States.

Tejaswini Prakash (also credited as "Tejaswini") is a film actress who has starred in a number of supporting and lead roles in Kannada language feature films. She began her career with "Masanada Makkalu" an art film that showcased her credentials as a linguistically versatile dramatist. She went on to win a Special Jury Award for her performance at the South Indian Cinema Association.

Siddharth Randeria (born Mumbai, India, December 17, 1955), is a Gujarati actor who has been described as "the top star of the Gujarati stage". Siddharth is known for his Gujarati comedy plays for which he has won multiple awards as a writer, director and actor. Some of his well-known plays are: He has also acted in a number of Bollywood movies including Khal Nayak and Shortkut.

Milla Jovovich ( born December 17, 1975) is an American model, actress, musician, and fashion designer. Over her career, she has appeared in a number of science fiction and action-themed films, for which music channel VH1 has referred to her as the "reigning queen of kick-butt".

Emmanuel " (born December 17, 1978) is a Filipino professional boxer and politician. He is the first eight-division world champion, in which he has won ten world titles, as well as the first to win the Lineal Championship in four different weight classes. He was named "Fighter of the Decade"
Date of Birth: 17-Dec-1978

Steven Frayne (born 17 December 1982 in Bradford) is an English magician who performs under the stage-name of Dynamo. Frayne grew up on Bradford's deprived Delph Hill Estate and also the Holmewood estate in the north of England. He first learnt to perform illusions from his grandfather and developed the skill during trips to New Orleans. Wanting to innovate, Frayne combined elements of dance

Heather Laurie Holden (born December 17, 1972, Los Angeles) is an American-Canadian actress and human rights activist. She is perhaps best known for her roles as Marita Covarrubias in The X-Files, Adele Stanton on The Majestic, Cybil Bennett in Silent Hill, Amanda Dumfries in The Mist, Olivia Murray in The Shield, and Andrea in The Walking Dead. Born in Los Angeles and raised in Toronto, Holden