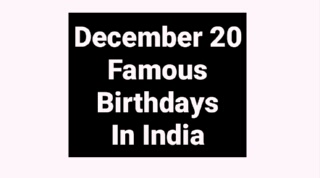 Sohail Khan born 20 December 1970) is an Indian director, writer, producer and actor working in the Hindi cinema. He is the younger brother of actors Salman Khan and Arbaaz Khan. He produces films under his banner Sohail Khan Productions. Khan was born in Mumbai, Maharashtra to screenwriter Salim Khan and his wife Salma (maiden name Sushila Charak). His paternal grandfather came to India from Afghanistan.

Sanjeeda Sheikh (born 20 December 1984 in Kuwait City, Kuwait.) is an Indian television and Bollywood actress. She spent her childhood and schooling days in Ahmedabad (Gujarat). Sanjeeda was born into a Muslim family on the 20 December 1984 in Kuwait City, Kuwait. She is originally from Ahmedabad, Gujarat, India. She and her family is settled in Mumbai. Never aspired to be an actor.

Parvathy Omanakuttan (born December 20, 1987) is an Indian model and actress who was crowned Miss India World in 2008 and later became first runner-up as Miss World Asia & Oceania at the Miss World 2008 competition. Omanakuttan was born in Kottayam, Kerala, as the first child of Omanakkuttan Nair. She is originally from Changanacherry and now lives in Mumbai.

Shonali Nagrani (born on 20 December 1981 in Delhi) is an Indian film actress and model, who has appeared in Hindi language films. She won the pageant of former Miss India International in 2003 and subsequently finished first runner-up of Miss International 2003. Alongside appearances as a model and as a television anchor most notably for the Indian Premier League shows for Sony TV India and ITV

Gauri Karnik is a Hindi and Marathi film actress born in a Kayasta family. She is best known for her acting in Sur in 2002. She is married to Sarim Momin since 2010 She started her career by doing acting in the episodes of Rishtey (TV series) like "Khel Khel Mein" which was aired on Zee TV during 1999-2001. Gauri Karnik acted in several Hindi movies. The best known so far is Sur in 2002.

Yugendran (born on 20 December 1976 as Yugendran Vasudevan Nair) is an Indian film actor and singer, who has sung more than 600 songs. He is also an occasional music director and host. Yugendran is the son of veteran popular playback singer-cum-actor Malaysia Vasudevan. He has 2 sisters named Pavithra and Prashanthini.

Danish Mujtaba (born 20 December 1988) is a member of Indian Men's National Hockey team. Represented India for the 1st time in 2009 under coach Jose Brasa. Hails from Allahabad, Uttar Pradesh. He is a very talented player who made his way after doing well at the junior level. He is a product of Delhi based Air India-SAI Hockey Academy

Mungara Yamini Krishnamurthy (born 20 December 1940) is an eminent Indian dancer of Bharatnatyam and Kuchipudi styles of dancing. Yamini Krishnamurthy was born in Madanapalli, Andhra Pradesh. She was born on a full moon night, and her grandfather named her Yamini Poornatilaka, which means “a full mark on the brow of night.” She was brought up in Chidambaram, Tamilnadu.

Shanta Gandhi (20 December 1917 — 6 May 2002) was an Indian theatre director, dancer and playwright. She was a founder-member of the central ballet troupe of the Indian People's Theatre Association (IPTA), and toured the country widely through the 1950s. As a playwright she is remembered as an early pioneer in reviving ancient Indian drama especially Sanskrit drama and folk theatre to modern India.

Joanna Noëlle Blagden Levesque (born December 20, 1990), professionally known as JoJo, is an American pop/R&B singer-songwriter and actress. After competing on the television show America's Most Talented Kids, she was noticed by record producer Vincent Herbert who asked her to audition for Blackground Records. JoJo released her self-titled debut album, in June 2004,

Ashley Cole (born 20 December 1980) is an English footballer who plays for Chelsea and the England national team. Primarily a left back, Cole has been described by his former manager Arsène Wenger as a "defender who simply loves to attack" and is considered by critics and fellow professional players as one of the best defenders of his generation.

Kathryn "Joosten" Rausch (December 20, 1939 – June 2, 2012) was an American television actress best known for her regular role as Karen McCluskey in Desperate Housewives, for which she won two Emmy Awards, and for her recurring role in The West Wing as Dolores Landingham. Joosten was born Kathryn Rausch in Chicago, Illinois.

David Roland Cook (born December 20, 1982) is an American rock singer-songwriter, who rose to fame after winning the seventh season of the reality television show American Idol. Prior to Idol he released an independent album entitled Analog Heart, followed by his post-Idol major-label debut David Cook which was released on November 18, 2008 and has since been certified platinum by the RIAA.

Jennifer Ann "Jenny" Agutter, OBE (born 20 December 1952) is an English film and television actress. She began her career as a child actress in the mid 1960s, starring in the BBC television series The Railway Children and the film adaptation of the same book, before taking adult roles and moving to Hollywood. She played Alex Price in An American Werewolf in London, Jessica 6 in Logan's Run,