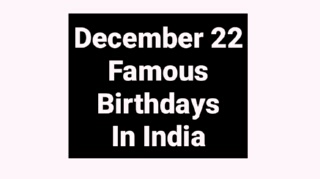 
Guru Gobind Singh Ji (born: Gobind Rai) Marathi: गुरु गोबिंद सिंघ; 22 December 1666 - 7 October 1708) was the Tenth of Eleven Sikh Guru Ji'. Born in Patna, Bihar in India, He was also a Warrior, Poet and Philosopher. He succeeded His Father Guru Tegh Bahadur Sahib Ji as the Leader of Sikhs at a young age of nine.


Jayamalini (or Jaya Malini) is a South Indian film actress who is famous for her vamp roles and item numbers. She acted in more than 500 Telugu, Tamil, Malayalam, Kannada and Hindi movies. Jayamalini was born in Sullurpeta, Andhra Pradesh on 22 December 1958. She had a dance number in Shalimar (1978), starring Rex Harrison, Dharmendra and Zeenat Aman,


Swami Satchidananda (December 22, 1914 – August 19, 2002), born as C. K. Ramaswamy Gounder, was an Indian religious teacher, spiritual master and yoga adept, who gained fame and following in the West during his time in New York. He was the author of many philosophical and spiritual books, including a popular illustrative book on Hatha Yoga.


Dilip Rasiklal Doshi  pronunciations (born December 22, 1947, Rajkot, Gujarat) is a former Indian cricketer who played in 33 Tests and 15 ODIs from 1979 to 1983. Doshi was one of only two Test bowlers that played in their first Test after the age of thirty to take 100 wickets, the other being Clarrie Grimmett. Doshi was already in his 30s


Tanmay Mishra (b. December 22, 1986, in Mumbai, India) is a Kenyan cricketer. He is a right-handed aggressive middle-order batsman and made his One Day International debut for Kenya in 2006 against Zimbabwe at Bulawayo. In 2007, Tanmay enrolled himself in an Indian University, and this prevented him from making any appearances for the Kenyan national side for the next three years.


Ralph Nathaniel Twisleton-Wykeham-Fiennes (born 22 December 1962), best known as Ralph Fiennes (( /ˈreɪf ˈfaɪnz/), is an English theatre and film actor. A noted Shakespeare interpreter, he first achieved success onstage in the Royal National Theatre. Since then, he has portrayed characters such as Nazi war criminal Amon Goeth in Schindler's List,


Vanessa Chantal Paradis (born December 22, 1972) is a French singer, model and actress. She became a child star at 14 with the worldwide success of her single Joe le taxi. Since 1991, Paradis has been a spokesmodel for Chanel. She was in a relationship with actor Johnny Depp from 1998 to 2012.


Jordin Brianna Sparks (born December 22, 1989) is an American pop and R&B recording artist, songwriter and actress. At the age of 17, Sparks won the sixth season of American Idol, becoming the youngest winner in American Idol history and remains as the most recent female to win American Idol. Her self-titled debut album was released in 2007,


Jonas Erik Altberg (born 22 December 1984 in Halmstad, Sweden), better known by his stage name Basshunter, is a Swedish singer-songwriter, record producer, and DJ. He is best known for his number one hits "Boten Anna", "Dota", "Now You're Gone" and "All I Ever Wanted". Basshunter has so far released a total of six albums,


Robin Hugh Gibb, CBE (22 December 1949 – 20 May 2012) was a singer and songwriter, best known as a member of the Bee Gees, co-founded with his twin brother Maurice and older brother Barry. Their younger brother Andy was also a singer. Born in the Isle of Man to English parents, the family later moved to Manchester before settling in Brisbane, Australia.


Luis Ignascio Urive Alvirde (born December 22, 1982) is a Mexican luchador enmascarado, or masked professional wrestler, signed with WWE and appearing on both its Raw and SmackDown television programs under the name Sin Cara (Spanish for "Faceless"). He is best known for his time in the lucha libre promotion Consejo Mundial de Lucha Libre (CMLL)


Claudia Alta "Lady Bird" Taylor Johnson (December 22, 1912 – July 11, 2007) was First Lady of the United States (1963-69) during the presidency of her husband Lyndon B. Johnson. Notably well educated for her time, she proved a capable manager and a shrewd investor. After marrying LBJ in 1934, when he was a political hopeful in Austin, Texas,