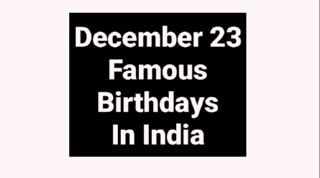 Atal Bihari Vajpayee (Hindi: अटल बिहारी वाजपेयी, Birth: 25 December 1924 in Gwalior) is a veteran Indian statesman who served as a non congress Prime Minister of India three times, viz. 13 days in 1996,13 months in 12th Loksabha elections and lastly a five year's term from 19 March 1998 until 19 May 2004. A parliamentarian for over four decades.

Nandita Morarji better known as Nagma (born 25 December 1974). At her peak in the 1990s, The Hindu stated that she "dominated Tamil and Telugu cinema" with her movies Killer, Gharana Mogudu, Kadhalan, Baashha and many others. Born of a Muslim mother and a Hindu father, and on Christmas, she began her acting career in Bollywood and acted in a few of the biggest Bollywood movies.

lNandish Sandhu (born December 25, 1981 in Bharatpur, Rajasthan, India) is an Indian television actor. Nandish made his stint in Star Plus's Kasturi as Raunak Sabarwal. Later he entered channel Sony TV's Khwaish to play the role of Yasir. He played as Rahul in Hum Ladkiyan and Kayamath as Saket and also starred in Ssshhhh...Phir Koi Hai on Star One.

Raju Srivastava (Hindi: राजू श्रीवास्तव ; born Satya Prakash Srivastava on December 25, 1963) often credited as Raju Shrivastav or Raju Srivastava, is an Indian comedian, and more popularly, an observational comedian. He is known most for his acute scrutiny and comical timing about various aspects of Indian life. Raju Srivastava was born on 25 December 1963, in Kanpur, India.

Jay Soni (also Jai Soni) is a Indian television actor. He was born in Gujarat. Soni started his career as a small actor in Dil Maange More in a supporting role. He played a nerd in the film MP3 - Mera Pehla Pehla Pyaar. He has been a part of the television series Dharti Ka Veer Yodha Prithviraj Chauhan where he played a role with grey shades and was shown against Prithviraj Chauhan.

Madan Mohan Malaviya (Hindi: पंडित मदन मोहन मालवीय) (1861–1946) was an Indian educationist, and freedom fighter notable for his role in the Indian independence movement and his espousal of Hindu nationalism. Later in life, he was also addressed as 'Mahamana'. He was the President of the Indian National Congress on four occasions.

Jackky Bhagnani (born 25 December 1984) is an Indian Hindi film actor. He is the son of Indian producer Vashu Bhagnani. He studied in St.Teresa’s High School and used to accompany his father on the sets of many movies. Post schooling, He chose to acquire a Degree in Commerce from H.R. College of Commerce and Economics, Mumbai.

Priya Rai , also known as Priya Anjali Rai and Priya Rai Anjali (born December 25, 1977), is an Indian American pornographic actress. Priya Anjali Rai entered the adult industry in 2007. Priya Rai moved from New Delhi to the United States at the age of two. Rai grew up in the suburbs of Minneapolis, MN. She attended Arizona State University. Priya started her career in modeling

Dr. Dharamvir Bharati (धर्मवीर भारती) (25 December 1926 – 4 September 1997) was a renowned Hindi poet, author, playwright and a social thinker of India. He was the Chief-Editor of the popular Hindi weekly magazine Dharmayug , from 1960 till his death in 1987 . Bharati was awarded the Padma Shree for literature in 1972 by the Government of India.

Humphrey De Forest Bogart (December 25, 1899 – January 14, 1957) was an American actor. He is widely regarded as a cultural icon. The American Film Institute ranked Bogart as the greatest male star in the history of American cinema. After trying various jobs, Bogart began acting in 1921 and became a regular in Broadway productions in the 1920s and 1930s.

Muhammad Ali Jinnah (25 December 1876 – 11 September 1948) was a lawyer, politician and statesman who is known as being the founder of Pakistan. He is popularly and officially known in Pakistan as 'Quaid-e-Azam' (lit. Great Leader) and 'Baba-e-Qaum' (lit. Father of the Nation). Jinnah served as leader of the All-India Muslim League from 1913.

Ann "Annie" Lennox, OBE (born 25 December 1954) is a Scottish singer-songwriter, political activist and philanthropist. After achieving minor success in the late 1970s as part of the New Wave band The Tourists, she and fellow musician David A. Stewart went on to achieve major international success in the 1980s as Eurythmics.

Sissy Spacek (born Mary Elizabeth Spacek; December 25, 1949) is an American actress and singer. She came to international prominence for her role as Carrie White in Brian De Palma's 1976 horror film Carrie (based on the first novel by Stephen King) for which she earned her first Academy Award nomination.