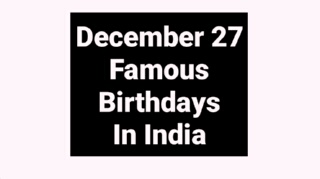 Salman Khan born Abdul Rashid Salim Salman Khan on 27 December 1965) is an Indian film actor. He has starred in more than 80 Hindi films. Khan, who made his acting debut with a minor role in the drama Biwi Ho To Aisi (1988), had his first commercial success with the blockbuster Maine Pyar Kiya (1989), for which he won a Filmfare Award for Best Male Debut.

Dawood Ibrahim (born Sheikh Dawood Ibrahim Kaskar), also known as Dawood Ebrahim, and Sheikh Dawood Hassan, is the head of the Indian organized crime syndicate D-Company in Mumbai. He is currently on the wanted list of Interpol for organised crime and counterfeiting. He was No. 3 on the Forbes' World's Top 10 most dreaded criminals list of 2011.

Vijay Arora (27 December 1944 – 2 February 2007) was an actor in Hindi films and television serials, most famous for his roles in Yaadon Ki Baaraat and as Indrajit in the television serial Ramayan. He is not to be confused with another Vijay Arora, who is a cinematographer. Arora won a gold medal when he graduated from the Film and television institute of India.

Panchi Bora (born 24 December 1985) is an Indian television actress and model from Assam. She also used to play a lead role in the Balaji Telefilms soap Kayamath. Panchi started her undergraduate course in law at ILS Law College in Pune, but put her studies on hold during her second year to pursue a career in television.

Lance Naik (LCpl) Albert Ekka (1942–71) was a soldier in the Indian army. He died in service in the Battle of Hilli, during the Bangladesh Liberation War of 1971. He was posthumously awarded the Param Vir Chakra, India's highest award for valour in the face of the enemy. Albert Ekka was born on 27 December 1942, in Jari village of Chainpur tehsil Ranchi tehsil of Ranchi district

Manvinder Singh Bisla (born December 27, 1984 in Hisar, Haryana), is an Indian cricketer. He is a wicket-keeper and right-handed batsman and usually opens the batting for his team. Bisla is one of the lesser known of the wicket-keeper/batsman that Indian cricket unearthed from the junior and India-A ranks in the last decade, the others being Ajay Ratra, Parthiv Patel, MS Dhoni and Dinesh Karthik.

Jayant Chaudhary (born 27 December 1978) is an Indian politician. He is a the General Secretary of the Rashtriya Lok Dal (RLD) and a member of Parliament representing Mathura in Uttar Pradesh state in the 15th Lok Sabha. He is grand son of Charan Singh former prime minister of India and son of Ajit Singh former union minister. He graduated with an M.Sc. from the London School of Economics.

Mangesh Panchal (born December 27, 1973) is an Indian-born Dutch One Day International cricketer. He made his debut for the Netherlands against Bermuda in August 2007.

Chyna (born Joan Marie Laurer; December 27, 1970) is a former American professional wrestler, actress, pornographic actress and former bodybuilder. She is best known for her career with the World Wrestling Federation (WWF) from 1997 to 2001, where she was billed as "Chyna: 'The Ninth Wonder of the World'" (André the Giant was already billed as the eighth).

William Scott "Bill" Goldberg (born December 27, 1966) is a former professional wrestler best known for his time in World Championship Wrestling (WCW) and World Wrestling Entertainment (WWE). He is notable for his lengthy undefeated streak in singles competition. The official count is listed as 173-0, although some have disputed the legitimacy of that total.

Hayley Nichole Williams (born December 27, 1988) is an American singer and songwriter. She is the lead vocalist of the American rock band Paramore. In 2002, at the age of 13, Williams moved from her hometown, Meridian, Mississippi, to Franklin, Tennessee. She met band members Josh and Zac Farro in her new school. While still in school, she tried out for a local funk cover band The Factory

Louis Pasteur ( /ˈluːi pæˈstɜr/, French: [lwi pastœʁ]; December 27, 1822 – September 28, 1895) was a French chemist and microbiologist who was one of the most important founders of medical microbiology. He is remembered for his remarkable breakthroughs in the causes and preventions of diseases. His discoveries reduced mortality from puerperal fever

Marlene Dietrich 27 December 1901 – 6 May 1992) was a German-American actress and singer. Dietrich remained popular throughout her long career by continually re-inventing herself, professionally and characteristically. In the Berlin of the 1920s, she acted on the stage and in silent films.

Emilie de Ravin ( /ˈɛməli də ˈrævɪn/; born 27 December 1981) is an Australian actress. She is commonly associated with her roles as Tess Harding on Roswell and Claire Littleton on the ABC drama Lost. In 2012 she guest-starred as Belle on the ABC drama Once Upon a Time and will be a series regular beginning in the show's second season.

John Amos (born December 27, 1939) is an American actor and former football player best known for his role as James Evans Sr. on the hit television series Good Times. His television work includes roles in The Mary Tyler Moore Show, the miniseries Roots, and a recurring role in The West Wing. He has also appeared on Broadway and in numerous motion pictures in a career that spans four decades.

Johannes Kepler December 27, 1571 – November 15, 1630) was a German mathematician, astronomer and astrologer. A key figure in the 17th century scientific revolution, he is best known for his eponymous laws of planetary motion, codified by later astronomers, based on his works Astronomia nova, Harmonices Mundi, and Epitome of Copernican Astronomy.