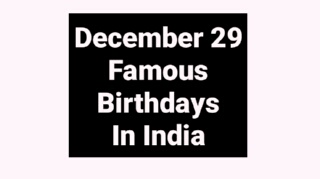 Rajesh Khanna (born Jatin Khanna on 29 December 1942) is an Indian actor of Hindi films, who has also been a film producer and a politician. He appeared in 163 feature films of which 106 had him as the solo lead hero and 22 were two hero projects and 17 short films. He won three Filmfare Best Actor Awards and was nominated for the same fourteen times.

Twinkle Khanna ( born Tina Jatin Khanna on 29 December 1973) is an Indian film actress who has acted in Bollywood and Telugu films. She is the wife of popular Bollywood actor Akshay Kumar and the daughter of established actors, Dimple Kapadia and Rajesh Khanna. After leaving film industry in 2001

Kuppali Venkatappagowda Puttappa (December 29, 1904 – November 11, 1994), widely known by the pen name Kuvempu or by the abbreviation K. V. Puttappa, was a Kannada writer and poet, widely regarded as the greatest poet of 20th century Kannada literature. He is the first among eight recipients of Jnanpith Award for Kannada. Puttappa wrote all his literary works using the pen name Kuvempu.

Ramanand Sagar (29 December 1917 – 12 December 2005) (born Chandramauli Chopra) was an Indian film director. He is most famous for making the extremely popular Ramayan television series, a 78-part TV adaptation of the ancient Hindu epic of the same name, starring Arun Govil as Lord Ram and Deepika Chikhalia as Sita. Ramanand Sagar was born at Asal Guru Ke near Lahore.

Pulkit Samrat (born December 29, 1983, Delhi) is an actor and model, is best known for starring as Lakshya Virani in the popular show Kyunki Saas Bhi Kabhi Bahu Thi opposite Mouni Roy. Pulkit Samrat was born in Delhi. The actor was suffering from a bad back and had a to go through a lot of trouble while shooting for the daily soap. He went to Dubai to get treatment for his back.

Padma Sri Syed Mujtaba Hussain Kirmani (born December 29, 1949, in Madras) played cricket for India and Karnataka as a wicket-keeper. He started off as an understudy to Farokh Engineer in the tours of England in 1971 and 1974 and to the 1975 Cricket World Cup. Kirmani made his debut against New Zealand and in his second Test

Dinanath Mangeshkar (December 29, 1900 - April 24, 1942) was a well-known Marathi theatre actor, a renowned Natya Sangeet musician and an exceptional Hindustani classical vocalist. He was also popularly and reverentially addressed as Master Deenanath Mangeshkar. He is also the father of well-known singers Lata Mangeshkar

Manav Gupta(born 29 December 1967) is an artist from India who has pioneered collaborative art as performances and mega murals.He has co-opted his art practices in paintings,poetry,music and sound to create one minute films on climate change, sustainable development, ecosystems and alternate energy for public service messages commissioned by the Ministry of Environment & Forests.

David Jude Heyworth Law (born 29 December 1972), known professionally as Jude Law, is an English actor, film producer and director. He began acting with the National Youth Music Theatre in 1987, and had his first television role in 1989. After starring in films directed by Andrew Niccol, Clint Eastwood and David Cronenberg.

Jonathan Vincent "Jon" Voight (/vɔɪt/) (born December 29, 1938) is an American actor. He has won one Academy Award, out of four nominations, and three Golden Globe Awards, out of nine nominations. Voight is the biological father of actress Angelina Jolie and actor [James Haven]. Voight came to prominence in the late 1960s with his performance as a would-be gigolo in Midnight Cowboy (1969).

Jane Colburn Levy (born December 29, 1989) is an American actress from Los Angeles County, California. She is best known for her current role as Tessa Altman on the ABC comedy series Suburgatory. She made her TV debut on Showtime's Shameless, and is due to appear in two movies in 2012. She has been named by critics as one of the breakout stars of 2011, and Forbes named her on their list of 30

Mary Tyler Moore (born December 29, 1936) is an American actress, primarily known for her roles in television sitcoms. Moore is best known for The Mary Tyler Moore Show (1970–77), in which she starred as Mary Richards, a 30-something single woman who worked as a local news producer in Minneapolis, and for her earlier role as Laura Petrie.

Patricia Davies Clarkson (born December 29, 1959) is an American actress. After studying drama on the East Coast, Clarkson launched her acting career in 1985 (a guest spot on Spenser: for Hire being one of her first acting jobs), and has worked steadily in both film and television. She twice won the Emmy for Outstanding Guest Actress in Six Feet Under.