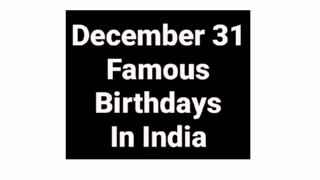 Prabhu Ganesan (born December 31, 1956) is a Tamil film actor and producer. He is the son of veteran actor Sivaji Ganesan.His son Vikram Prabhu is also a budding actor. After making his debut in the film Sangili in 1982, he has acted in over 150 films. Prabhu Ganesan has appeared alongside other actors like Rajinikanth, Kamal Hassan, and his father Sivaji Ganesan in many hit films

Lakshmi Tatama is an Indian girl born in 2005 in a village in Araria district, Bihar, having "4 arms and 4 legs." She was actually one of a pair of ischiopagus conjoined twins where one twin was headless due to its head atrophying and chest underdeveloping in the womb, causing an appearance of one child with four arms and four legs.

Major General John Dutton (Johnny) Frost CB, DSO & Bar, MC, DL (31 December 1912 – 21 May 1993) was a British airborne officer best known for being the leader of the small group of airborne forces that actually got to Arnhem bridge during the Battle of Arnhem.

Laxman Sivaramakrishnan (born December 31, 1965, Madras), popularly known as Siva and LS, is a former Indian cricketer. He was a right arm leg-spinner. He is now a commentator. Born in a Brahmin Iyer family, Siva first drew attention as a 12 year old claiming 7 for 2 in a Madras inter-schools championship game.

Shrilal Shukla (31 December 1925 – 28 October 2011) was a Hindi writer, notable for his satire. He worked as a Provincial Civil Services (PCS) officer for the state government of Uttar Pradesh, later inducted into the IAS. He has written over 25 books, including Makaan, Sooni Ghaati Ka Sooraj.

Kongara Jaggayya (31 December 1928 – 5 August 2004; also transliterated as Jaggaiah) was an Indian Film Actor from Telugu cinema & Theater . He was popularly known as "Kanchu Kantam" Jaggayya (Telugu for his booming voice. Jaggayya was born in a well-to-do family in Morampudi village near Tenali in Guntur district.

Amit Jethwa (1975 – 20 July 2010) was an Indian environmentalist and social worker, active in the Gir Forest area near Junagadh, Gujarat. He had filed several court cases against illegal mining in the protected area, naming Bharatiya Janata Party member of parliament, Dinu Solanki as one of the respondents.

Ameer Muhammad Akram Awan (born December 31, 1934 in British India) is Shaikh of the Islamic Naqshbandia Owaisiah of Tasawwuf/Sufism. He is a mufassir (commentator of the Quran); his tafseer is “Israr-ul-Tanzeel”. He is a lecturer, a leader, a philosopher, and a reformist. His spiritual followers are spread all over the world, especially in Pakistan.

Krishna Ballabh Sahay (31 December 1898 – 3 June 1974) was a freedom fighter, who after independence became the Revenue minister of Bihar and then went on to become the Chief Minister of unified Bihar . Krishna Ballabh Sahay poularly known as K. B. Sahay was born on December 31, 1898 at Sheikhpura in the Patna district of Bihar.

Rajeevan is an art director in South Indian films. He is a graduate of Loyola College, Chennai. Rajeevan began doing art direction for ad films and television serials, before being given the opportunity to work in a feature film for the first time through Ameer's Mounam Pesiyadhe in 2002.

Sohini Pal (born 31 December 1986), born in Kolkata, India, is a Bengali Film actress. She is a daughter of Tapas Pal. She was studying in Class XII (commerce), Lakshmipat Singhania Academy. A student of Lakshmipat Singhania Academy, in 2004 when she was in Class XII, she made her debut in the Anjan Dutt directed English film Bow Barracks Forever.

Sucheta Kadethankar (born 31 December 1977) is an Indian Information technology developer from Pune. On July 15, 2011 she became the first Indian to have walked across the Gobi desert. The 33 year-old was a part of a 13 member team led by the desert explorer Ripley Davenport in the expedition - Gobi Desert 2011.

Evarist Pinto (born on 31 December 1933, Goa, India) is the former Archbishop of Karachi, Pakistan. He received his religious training at the Christ the King seminary in Karachi, where he was ordained a priest on 6 January 1968. He is fluent in almost 10 languages including English, Urdu, Punjabi, Hebrew, Greek, Latin, Italian, German, French and Konkani.

Padma Bhushan Syed Zahoor Qasim (born December 31, 1926 in Allahabad, Uttar Pradesh, India) is a leading Indian marine biologist. Qasim helped lead India's exploration to Antarctica and guided the other seven expeditions from 1981 to 1988. He was a Member of the Planning Commission of India from 1991 to 1996. Qasim is an Honorary Professor of many universities.

Tadapatla Ratna Bai, a politician from Indian National Congress party is a renowned Member of the Parliament of India representing Andhra Pradesh in the Rajya Sabha, the Council of States, the upper house of the Indian Parliament. She has been an active member since her election into the house rising concerns ranging from dowry deaths to Science and Technology.

Isha Basant Joshi (born 31 December 1908) was born Isha Basant Mukand and published books under the name of Esha Joshi. She was the first woman to be accepted as an officer in the Indian Administrative Service. She was also the first "Indian" to be accepted into the "Bastion of the British" school of La Martiniere Girls High School in Lucknow, India.

Sir Ben Kingsley, CBE (31 December 1943) is an English actor who has won an Oscar, BAFTA, Golden Globe and Screen Actors Guild awards in his career. He is known for starring as Mohandas Gandhi in the film Gandhi in 1982, for which he won the Academy Award for Best Actor.

Sir Philip Anthony Hopkins, CBE (born 31 December 1937), best known as Anthony Hopkins, is a Welsh actor of film, stage, and television, and a composer. Considered to be one of the greatest living actors, Hopkins is perhaps best known for his portrayal of Hannibal Lecter in The Silence of the Lambs. Other prominent film credits include The Mask of Zorro, The Lion in Winter, Magic.

Val Edward Kilmer (born December 31, 1959) is an American actor. Originally a stage actor, Kilmer became one of the highest paid and most well known actors in the world and is best known for his role as Jim Morrison in Oliver Stone's The Doors, and Bruce Wayne/Batman in Joel Schumacher's Batman Forever. He became popular in the mid-1980s after a string of appearances in comedy films.

Henri-Émile-Benoît Matisse 31 December 1869 – 3 November 1954) was a French artist, known for his use of colour and his fluid and original draughtsmanship. He was a draughtsman, printmaker, and sculptor, but is known primarily as a painter. Matisse is commonly regarded, along with Picasso and Marcel Duchamp.

Henry John Deutschendorf, Jr. (December 31, 1943 – October 12, 1997), known professionally as John Denver, was an American singer/songwriter, activist, and humanitarian. After traveling and living in numerous locations while growing up in his military family, Denver began his music career in folk music groups in the late 1960s.

Sir Alexander Chapman "Alex" Ferguson, CBE (born 31 December 1941) is a Scottish football manager and former player who has managed Manchester United since 1986. His tenure has seen the club go through an era of success and dominance both in England and in Europe, giving Ferguson a reputation as one of the most admired and respected managers in the history of the game.

Nicholas Charles Sparks (born December 31, 1965) is an internationally bestselling American novelist and screenwriter. He has 16 published novels, with elements including cancer, death, pirates, and love. Seven have been adapted to films, including Message in a Bottle, A Walk to Remember, The Notebook, Nights in Rodanthe, Dear John, The Last Song, and most recently The Lucky One.

Gabrielle (Gabby) Christina Victoria Douglas (born 31 December 1995) to parents Timothy Douglas and Natalie Hawkins , is an American female artistic gymnast. She was a member of the U.S. team that won the gold medal in the team finals at the 2011 World Artistic Gymnastics Championships in Tokyo, Japan.

LaDonna Adrian Gaines (December 31, 1948 – May 17, 2012), known by the stage name Donna Summer, was an American singer and songwriter who gained prominence during the disco era of the late 1970s. A five-time Grammy Award winner, Summer was the first artist to have three consecutive double albums reach number one on the United States Billboard chart.

Gong Li (born 31 December 1965) is a Chinese-born, Singaporean film actress. Gong first came into international prominence through close collaboration with Chinese director Zhang Yimou and is credited with helping to bring Chinese cinema to Europe and the United States. She has twice been awarded the Golden Rooster and the Hundred Flowers Awards as well as the Berlinale Camera.

James Remar (born December 31, 1953) is an American actor and voice artist. He has appeared in movies, video games, and TV shows. He played Richard, the on-off tycoon boyfriend of Kim Cattrall's character in Sex and the City, as Ajax in The Warriors, as the homicidal maniac Albert Ganz in the 1982 comedy/thriller 48 Hrs.

Tim Matheson (December 31, 1947) is an American actor, director and producer. He is perhaps best known for his portrayal of the smooth-talking Eric "Otter" Stratton in the 1978 comedy National Lampoon's Animal House and the bitter Vice President John Hoynes in the NBC drama, The West Wing and has had a variety of other well-known roles.

John Allen Muhammad (December 31, 1960 – November 10, 2009) was a spree killer from the United States. He, along with his younger partner, Lee Boyd Malvo, carried out the 2002 Beltway sniper attacks, killing at least 10 people. Muhammad and Malvo were arrested in connection with the attacks on October 24, 2002, following tips from alert citizens.

Shamele "Willie" Mackie better known by his stage name Papoose is an American rapper. Born December 31, 1978 in Brooklyn, New York City by Sierra Leonean parents, Papoose made his first attempts at rapping at the age of 7. He was given his name by his grandma Viviann because of his childhood resemblance to a Native American child.

Beatrice "Bebe" Neuwirth (born December 31, 1958) is an American actress, musician and dancer. She has worked in television and is known for her portrayal of Dr. Lilith Sternin, Dr. Frasier Crane's wife (later ex-wife), on both the TV sitcom Cheers (in a starring role), and its spin-off Frasier (in a recurring guest role).