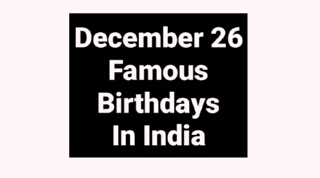 Murlidhar Devidas Amte (December 26, 1914 – February 9, 2008), popularly known as Baba Amte (Marathi: बाबा आमटे), was an Indian social worker and social activist known particularly for his work for the rehabilitation and empowerment of poor people suffering from leprosy. Amte was born to Devidas and Laxmibai Amte in the town of Hinganghat in Wardha District of Maharashtra.

Udham Singh ( December 26, 1899 – July 31, 1940) was an Indian independence activist, best known for assassinating Michael O'Dwyer in March 1940 in what has been described as an avenging of the Jallianwalla Bagh Massacre. Udham Singh changed his name to Ram Mohammad Singh Azad, symbolizing the unification of the three major religions of India

Sattanathapuram Venkataraman Shekhar (Caţţanātapuram Věŋkaţarāmaņ Cēkar) (born 26 December 1950) is a Tamil playwright and film actor known best for his slapstick humor and for his public welfare initiatives. In 2006, he made an entry into politics by contesting and winning the Legislative Assembly Elections as an All India Anna Dravida Munnetra Kazhagam

Mother Meera, born Kamala Reddy (born 26 December 1960) is believed by her devotees to be an embodiment (Avatar) of the Divine Mother (Shakti). Born in Chandepalle a small village in Nalgonda district of Andhra Pradesh, India, she had her first samādhi, a state of complete spiritual absorption, at the age of six, which lasted for a whole day.

 Dr. Abid Hussain (26 December 1926 – 21 June 2012) was an Indian economist, civil servant and diplomat. He was India's Ambassador to the United States of America from 1990 to 1992 and a member of the Planning Commission from 1985 to 1990. He was married to Trilok Karki, author of "Sino-Indian Conflict and International Politics in the Indian Sub-Continent", (1977) and has three children.

Toral Rasputra (born December 26, 1987) is an Indian actress best known for playing the protagonist, Priyanka Sethi in Disney Channel India's superhit show, Dhoom Machaao Dhoom. Priyanka plays the guitar and is the lead singer of the Pink Band. Toral started her career with advertisements for brands like Amul and Shoppers' Stop.

Sir Osborne Arkell Smith, KCSI, KCIE, Kt (26 December 1876-30 August 1952) was the first Governor of the Reserve Bank of India from 1 April 1935 to 30 June 1937. Smith was professional banker, and had served for 20 years with the Bank of New South Wales and 10 years with the Commonwealth Bank of Australia. He then came to India in 1926 as Managing Governor of the Imperial Bank of India.

Jared Joseph Leto (born December 26, 1971) is an American actor, director, producer, and musician. Leto has appeared in both big-budget Hollywood films and smaller projects from independent producers and art houses. He rose to prominence for playing Jordan Catalano in the teenage drama My So-Called Life (1994)

Charles Babbage, FRS (26 December 1791 – 18 October 1871) was an English mathematician, philosopher, inventor and mechanical engineer who originated the concept of a programmable computer. Considered a "father of the computer", Babbage is credited with inventing the first mechanical computer that eventually led to more complex designs.

Phillip Harvey "Phil" Spector (born Harvey Phillip Spector on December 26, 1940 ) is a former American record producer and songwriter. The originator of the "Wall of Sound" production technique, Spector was a pioneer of the 1960s girl-group sound and produced over 25 Top 40 hits in 1960–1965. Some of his famous girl groups are The Ronettes and The Crystals.

Christopher Adam "Chris" Daughtry (born December 26, 1979) is an American musician best known as the lead vocalist and rhythm guitarist for the rock band Daughtry and as the fourth-place contestant on the fifth season of American Idol, the competition that he was eliminated from on May 10, 2006. After his elimination from Idol.

Aaron James Ramsey (born 26 December 1990) is a Welsh footballer who plays for Arsenal and captains the Wales national football team. A central attacking midfielder with a wide range of passing, he established himself as a playmaker for Arsenal following the departure of Cesc Fàbregas. Ramsey played for Cardiff City as a schoolboy where he spent eight years in youth football

Eden Rebecca Sher (born December 26, 1991) is an American actress, best known for her role as Sue Heck on ABC's The Middle. She may also be known for her role as Carrie Fenton in the television series Sons and Daughters. Sher has been acting since she was 8 years old. She has appeared on The Tonight Show with Jay Leno, the short film Stuck.

Hugo Lloris (French pronunciation: [yˌgo loˈʀis]; born 26 December 1986) is a French international footballer who currently plays as a goalkeeper for French club Olympique Lyonnais in Ligue 1. He is also a French international and is currently the first-choice goalkeeper for both club and country. He also serves as the first-choice captain of the national team.

William Charles "Bill" Ayers (born December 26, 1944) is an American elementary education theorist and a former leader in the movement that opposed U.S. involvement in the Vietnam War. He is known for his 1960s activism as well as his current work in education reform, curriculum, and instruction. In 1969 he co-founded the Weather Underground

Henry Valentine Miller (December 26, 1891 – June 7, 1980) was an American writer and painter. He was known for breaking with existing literary forms and developing a new sort of "novel" that is a mixture of novel, autobiography, social criticism, philosophical reflection, surrealist free association, and mysticism.