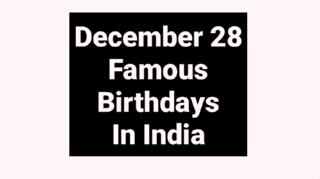 Dhirajlal Hirachand Ambani (28 December 1932 – 6 July 2002) was an Indian rags-to-riches business tycoon who founded Reliance Industries in Mumbai with his cousin. Ambani took his company public in 1977. Dhirubhai has been among the select few to be figured in the Sunday Times list of top 50 businessmen in Asia.

Sir Ratan Naval Tata, KBE (born 28 December 1937), is an Indian businessman who became chairman (1991– ) of the Tata Group, a Mumbai-based conglomerate. He is a member of a prominent Tata family of Indian industrialists and philanthropists. Among many other honours accorded him during his career, Tata received the Padma Bhushan.

Arackaparambil Kurien Antony (born on December 28, 1940) is an Indian politician who is currently a Member of Parliament from Rajya Sabha and the current Defence Minister of India. He previously served as the Chief Minister of Kerala. He presently also serves as the chairman of the Disciplinary Action Committee of the All India Congress Committee and member of the Central Election Committee

Arun Jaitley (Hindi:अरुण जेटली ) (born 28 December 1952) is a prominent Indian politician and a member of the Bharatiya Janata Party (BJP), which is currently the largest Opposition party in India. He is the leader of opposition in the Rajya Sabha and has previously served as the Union Minister for commerce, industry, law and justice of the Government of India.

Sajid Khan (born 28 December 1951 in Mumbai, India) is a former Indian actor. He is the adopted son of Indian film producer Mehboob Khan, founder of Mehboob Studios, in India. Sajid started acting as a child appearing as the younger version of Sunil Dutt's character in his father Mehboob's 1957 film Mother India. He played a more central role in his father's next and last film Son of India in 1962.

Cézanne Khan is an Indian television actor. He became famous by playing the role of Anurag Basu in Balaji Telefilms's Kasautii Zindagii Kay, aired on STAR Plus. He has also taken roles in Pakistani television. Khan went to boarding school at Barnes in Deolali. He earned his Bachelor of Communications from M.M.K. College of Commerce & Economics in Bandra, Bombay.

Carol Gracias is an Indian model born and brought up in Mumbai. She is a past winner of the coveted India's L'Oreal/Elite "Look of the year" title. She belongs to the Goan Catholic community, a Christian community in India. Carol had a cameo in the movie Being Cyrus. She also appeared in the music video for the song Right Here Right Now from the movie Bluffmaster, starring Abhishek Bachchan.

Diganth Manchale known as Diganth (Kannada: ದಿಗಂತ್), is an India film actor and former model. He is mainly active in Kannada cinema. He made his acting debut in "Miss California" in 2006. He is perhaps best known for his performance as Doodhpeda,in Gaalipata. Diganth completed his schooling in Seva Bharathi and pre-university in Tunga Mahavidyalaya, Thirthahalli.

Harisree Ashokan (born December 28, 1964) is a Malayalam film actor who is known for his comedy roles. He has acted in more than 75 Malayalam films. Ashokan holds a diploma in Telecomm Engineering from Anjoor, Kerala. He found work as an assistant lineman in 1984 with the Telecom Department in Cochin, Kerala. He worked until 1987, when he rose to become a lineman.

Siddhartha Basu (born December 28, 1954) is an Indian television producer-director and quiz show host, most known as producer-director of shows like, Kaun Banega Crorepati (2000–present), and Dus Ka Dum (2008–present). He is Chairman and Managing Director of Big Synergy Media Ltd., established in 1988 as Synergy Media Ltd., which produces these shows. Starting in 1977.

G. K. Vasan, (born December 28, 1964) is a member of the Indian National Congress based in Tamil Nadu, India. He was educated at the Madras Christian College Higher Secondary School and was later graduated from the New College. He is the son of a veteran Congress leader, G. K. Moopanar, who later formed his own political party, the Tamil Maanila Congress.

Intikhab Alam Khan  (born 28 December 1941) is a retired Pakistani cricketer who played in 47 Tests and 4 ODIs from 1959 to 1977. He also played in English county cricket for Surrey between 1969 and 1981. Intikhab was Pakistan's first One Day International cricket captain. He played 3 matches as captain, winning two and losing one.

Denzel Hayes Washington, Jr. (born December 28, 1954) is an American actor, film director and film producer. He first rose to prominence when he joined the cast of the medical drama, St. Elsewhere, playing Dr. Philip Chandler for six years. He has received much critical acclaim for his work in film since the 1990s, including for his portrayals of real-life figures, such as Steve Biko, Malcolm X,

Stan Lee (born December 28, 1922) is an American comic book writer, editor, actor, producer, publisher, television personality, and the former president and chairman of Marvel Comics. In collaboration with several artists, most notably Jack Kirby and Steve Ditko, he co-created Spider-Man, the Hulk, the X-Men, the Fantastic Four, Iron Man, Thor, and many other fictional characters,

Noomi Rapace (born 28 December 1979) is a Swedish actress. She is best-known for her portrayal of Lisbeth Salander in the Swedish/Danish film adaptations of the Millennium series: The Girl with the Dragon Tattoo, The Girl Who Played with Fire and The Girl Who Kicked the Hornets' Nest.

Dame Margaret Natalie "Maggie" Smith, DBE (born 28 December 1934) is an English film, stage and television actor. She has had an extensive career both on screen and in live theatre, and is known as one of Britain's pre-eminent actresses. She made her stage debut in 1952 and is still performing after 60 years. She has won numerous awards for acting, both for the stage and for film,

Sienna Rose Miller (born December 28, 1981) is an American-born English actress, model, and fashion designer. She is best known for her roles in Layer Cake, Alfie, Factory Girl, The Edge of Love and G.I. Joe: The Rise of Cobra. In 2007, the London Film Critics named her British Actress of the Year for Interview. In 2006, she designed a fashion capsule for Pepe Jeans.

John Roger Stephens (born December 28, 1978), better known by his stage name John Legend, is an American singer-songwriter and actor. He has won nine Grammy Awards, and in 2007, he received the special Starlight award from the Songwriters Hall of Fame. Prior to the release of his debut album, Stephens' career gained momentum through a series of successful collaborations

Joseph "Joe" Michael Manganiello ( born December 28, 1976) is a classically trained American film and theatre actor. He holds a BFA in acting from the Carnegie Mellon School of Drama. He played Flash Thompson in the original Spider-Man film series, and was previously best known for his recurring roles in television on ER,

Linus Benedict Torvalds (born December 28, 1969 in Helsinki, Finland) is a Finnish American software engineer and hacker, who was the principal force behind the development of the Linux kernel. He later became the chief architect of the Linux kernel, and now acts as the project's coordinator.