In this post you will know 11 January's famous birthday personality in India like Bollywood actor, actress, cricketer, politician. January 11 famous birthdays in India 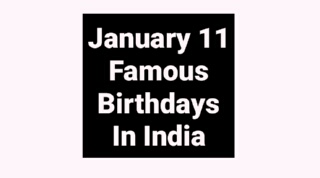 Anju Mahendru (born 11 January 1946) is an Indian actress. Mahendru was born in Dehradun. She is famed for her relationship with famous Bollywood star Rajesh Khanna and was briefly engaged to cricket player Gary Sobers. Mahendru started modelling at the age of 13. She was discovered by poet and lyricist Kaifi Azmi who recommended her to Basu Bhattacharya. Basu cast her in Uski Kahani in 1966.

Kiran Rathod is an Indian film actress. She has appeared in Hindi, Malayalam and Tamil films. Rathod was born on 11 January 1981 in Jaipur, Rajasthan into a Rajput family. She is a graduate of Mithibai College in Mumbai. She is the cousin of Bollywood actress Raveena Tandon. She first started appearing in Hindi pop song albums in late 1990s which caught the attention of Hindi movie producers.

Vivaan Shah is an Indian actor working in the Hindi film industry, who made his film debut with Saat Khoon Maaf (2011) to critical acclaim. Thereafter, he signed a three-film deal with director Vishal Bhardwaj, he also got the lead role in Vishal's next film, Dreams, with Deepika Padukone and Priyanka Chopra, his role was initially to be done by Saif Ali Khan.

Anu Agarwal (born 11 January 1969) is an Indian model who later became a Bollywood actress. Born in New Delhi, she is best known for her leading role in the movie Aashiqui. Agarwal was paired opposite Rahul Roy, a newcomer for her first movie, Aashiqui. She also appeared in King Uncle with Jackie Shroff and The Cloud Door directed by Mani Kaul.

Tara Sharma (born 11 January 1977) is a British Indian actress. She is half British and half Indian. Sharma is the daughter of the well-known author and actor, Partap Sharma, and Susan Sharma, and is an alumna of the London School of Economics and of the United World College of the Adriatic. She is married to ad film producer Roopak Saluja (an INSEAD alumnus)on 24 November 2007.

Ishaan Khattar is an Indian actor and the half-brother of Bollywood actor Shahid Kapoor. Khattar is the son of actors Neelima Azeem and Rajesh Khattar who separated in 2001. His first role was in Vaah! Life Ho Toh Aisi! where he appeared opposite Shahid Kapoor. He is currently studying in Billabong High International School at Juhu in Mumbai.

Sandali Sinha is an Indian Bollywood actress and model. Her acting in Tum Bin was appreciated by critics. She comes from an Air Force background. She lost her father in a road accident. Her mother single-handedly brought up her three children in Delhi. She graduated from Jesus and Mary College, Delhi. Sinha went to Kishore Namit Kapoor Acting Institute.

Gali Janardhana Reddy ( born 11 January 1967) is a Indian politician with the Bharatiya Janata Party and one of the richest politicians of Karnataka. He has been implicated in the massive illegal mining scandal in Bellary and the related Belekeri port scam. Janardhana Reddy is at the center of the illegal iron-ore mining controversy in the Karnataka government.

Aju Varghese, credited mononymously as Kuttu, is an Indian film actor. He made his debut in 2010 in the Malayalam film Malarvadi Arts Club, and is active in the Malayalam film industry. Aju Varghese was born in Thiruvalla a City in Pathanamthitta, Kerala. He did schooling in Rajagiri High School Kalamasserry in Ernakulam. Here he acted in various dramas and skits for the annual day celebrations.

Balachandra Menon is an Indian film actor, director, script writer, lyricist, and producer who works in Malayalam cinema. He made a number of popular films in the 1980s and 1990s. He won the National Film Award for Best Actor for his role as Ismail in the 1998 film Samantharangal, which was also directed by him. Along with Fazil and Padmarajan.

Jagdish Tytler (b. January 11, 1944 as Jagdish Kapoor) is a controversial Indian National Congress politician, and former member of Indian Parliament. He was the Indian Union Minister of State for Overseas Indian Affairs, a position he resigned from after an official commission of inquiry noted the 'balance of probability' indicated he was responsible for inciting and leading murderous mobs.

Babu Lal Marandi (born 11 January 1958) was the first Chief Minister of Jharkhand. He is the founder and national president of Jharkhand Vikas Morcha (Prajatantrik). He is the Member of Parliament from Koderma Lok Sabha constituency. He was the Minister of State, Forests & Environment, Govt. of India in the Atal Bihari Vajpayee government.

Shekhar Gupta (born 26 August 1957) is the editor-in-chief of The Indian Express.. Shekhar has a weekly column called National Interest. It covers a range of issues and is the subject of his forthcoming book. He also hosts an interview-based programme Walk the Talk on NDTV 24x7. He was awarded the Padma Bhushan for the year 2009 for his contribution to the field of journalism.

Imran Zahid(born 11 January 1982) is an Indian actor in both theatre and Bollywood. He has acted in Mahesh Bhatt's The Last Salute, based on Muntadhar al-Zaidi's book of the same title. He began acting while at school in Bokaro. He then attended Hindu College, Delhi University, from where he got a BCom degree. While at university Zahid became involved with a theatre group run by Arvind Gaur.

Kattassery Augustine Joseph (January 11, 1909 - February 3, 1965) was an Indian classical musician born in Kerala, India. The singer Yesudas is his son. He was born in a Christian family in Kochi. He started training in music and acting at a very young age. He had sung many songs and acted in many plays.

Shrimati Asha Khadilkar (Born: 1955) is a Mumbai, India based vocalist renowned for her specialization in Indian(Hindustani) Classical, Semi-Classical and Devotional Music including Natya Sangeet. Born in the mecca of Marathi Drama movement, Sangli, Maharashtra, India in 1955 , Asha took her initial steps in music under the guidance of Late Shri. Balkrishnabuva Mohite .

Sunil Kumar Mahato (11 January 1966 – 4 March 2007) was a member of the 14th Lok Sabha of India. A member of the Jharkhand Mukti Morcha (JMM) political party, he represented the constituency of Jamshedpur in the eastern state of Jharkhand. Mahato was assassinated by suspected Maoist rebels near Ghatsila in East Singhbhum district on 4 March 2007.

Charles (Charlie) James Fane Preedy (11 January 1900 – February 1978) was an English football goalkeeper. One of six children, Preedy was born in Neemuch, Madhya Pradesh, India, where his father was serving with the Royal Artillery. The family returned to Eltham, London, in 1907 where he attended Gordon School. He began playing football as a youth, turning Careeral in 1924 with Third Division.