In this post you will know 12 January's famous birthday personality in India like Bollywood actor, actress, cricketer, politician. January 12 famous birthdays in India 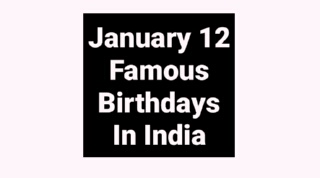 Sakshi Tanwar (born 12 January 1973) is an Indian television and Bollywood actress. She is best known for playing the role of Parvati in the television soap opera, Kahaani Ghar Ghar Kii. She is one of the leading ladies of Indian Television. Sakshi's consequent continued patronage of the largely female audience of the show had been instrumental in changing the fortunes of the production house Bala.

Arun Govil (born 12 January 1958) is an award-winning Indian actor, producer and director. He has acted in various Hindi, Bhojpuri, Oriya and Telugu movies. He is best known for playing Rama in Ramanand Sagar's hit television series Ramayan (1986). Arun Govil was born in Ramnagar near Meerut, Uttar Pradesh. He got his formal education at Meerut University.

Swami Vivekananda (12 January 1863–4 July 1902), born Narendra Nath Datta was an Indian Hindu monk. He was a key figure in the introduction of Indian philosophies of Vedanta and Yoga to the western world, and was credited with raising interfaith awareness.

Priyanka Gandhi Vadra (born 12 January 1972), is an Indian politician. She is the granddaughter of Feroze Gandhi and Indira Gandhi, and belongs to the Nehru-Gandhi family. Priyanka Vadra (née Priyanka Gandhi) is the second of two children of late Rajiv Gandhi and Sonia Gandhi, current President of the Indian National Congress, and the Chairperson of the ruling United Progressive Alliance.

Yellapragada Subbarao (12 January 1895 – 9 August 1948) was an Indian biochemist who discovered the function of adenosine triphosphate as an energy source in the cell, and developed methotrexate for the treatment of cancer. Most of his career was spent in the United States.

Moodbidri Veerappa Moily (born January 12, 1940) is the current Minister of Corporate Affairs in the Indian government. Moily was elected as MP of the Chickballapur district by a wide margin in 2009. He currently serves as the All India Congress Committee General Secretary in charge of Andhra Pradesh. He is one of the senior members of the Congress Party.

Ajay Makan (born 12 January 1964) is the current Sports minister and member of the 15th Lok Sabha of India. He represents the New Delhi constituency of Delhi and is a member of the Indian National Congress (INC) political party. Ajay Maken, was elected the President of Delhi University Students Union (DUSU) in 1985, having the rare honor of being the only B.Sc Chemistry(Hons).

Mirza Basheer-ud-Din Mahmood Ahm (January 12, 1889 - November 7, 1965), was Khalifatul Masih II, head of the Ahmadiyya Muslim Community and the eldest son of Mirza Ghulam Ahmad from his second wife, Nusrat Jehan Begum. He was elected as the second successor of Mirza Ghulam Ahmad on March 14, 1914 at the age of 25, the day after the death of his predecessor.

Ramchandra Narhar Chitalkar (January 12, 1918–January 5, 1982) was a renowned music composer in the movie industry of India. In the composer's role, he mostly used the name C. Ramachandra, though he also used the names Annasaheb (in the movies Bahadur Pratap, Matwale, and Madadgaar), Ram Chitalkar (in the movies Sukhi Jeevan, Badla, Mr. Jhatpat.

Jijabai was the mother of Shivaji, founder of the Maratha Empire. Jijabai was born on 12 January 1598 and a daughter of Lakhoji Jadhav in present-day Buldhana district of Maharashtra State. As per the customs of that age, she was wed at an early age to Shahaji Bhosale, a nobleman and military commander under the Adil Shahi sultans of Bijapur in present-day Karnataka.

Bhagwan Das (January 12, 1869 – September 18, 1958) was an Indian theosophist and public figure. For a time he served in the Central Legislative Assembly of British India. He became allied with the Hindustani Culture Society and was active in opposing rioting as a form of protest. As an advocate for national freedom from the British rule.

She gradually came to prominence winning the World Youth Championships in the categories of U-14 and U-18. In 2011 she won the Asian Individual Women Chess Championship 2011. Her personal coach is N.V.S. Raju. In July 2011, Harika achieved a rare feat to earn the Grandmaster title.

P. Janardhan Reddy popularly known as PJR (January 12, 1948 – December 28, 2007), was an Indian politician and labour leader. He had served as MLA five times for the Hyderabad constituency of Khairtabad. He was MLA for the constituency in 1978, 1985, 1989, 1994, and 2004 until his death. He belonged to the Congress party. P. Janardhan Reddy was born in Hyderabad to P. Papi Reddy and Shivamma.

Henrietta Branford (January 12, 1946 - April 23, 1999) was an Indian-born fiction writer who wrote many novels including Fire, Bed and Bone. After her death in 1999 Julia Eccleshare (Children's Book Editor of the Guardian newspaper and chairman of the Nestlé Smarties Book Prize) and Anne Marley (Head of Children’s, Youth & Schools Services for Hampshire Library & Information Service)

Rajeev Bindal is minister of health and family welfare in Government of Himachal Pradesh, India. .Son of late Vaid Bal Mukand Bindal; born on 12 January 1955 at Solan. He is third term MLA from Solan. He is a doctor by Career. He started social service right from his college days. After graduation, he went to tribal areas of Bihar to serve as a doctor for three years.

Dr. V. N. Krishnamurthy (born January 12, 1937) is the former Dy. Director of VSSC and Honorable Director of ISRO-UoP Interaction cell. He obtained his M.Sc. from Madras University and Ph.D. from Indian Institute of Science, Bangalore in 1967. He joined Vikram Sarabhai Space Centre, (Indian Space Research Organization) in February 1968 as chief of Analytical facility.

Mruthyunjay Doddawad is the founder of Sangeetha Dhama music academy. He is well known as a light music director and singer. He is the son of Sri. Chandrashekhar Doddwad and Smt. Susheela Chandrashekhar. He developed a passion for music in his early childhood. His passion was groomed by eminent guru Late Sri N. Balasubramanyam.