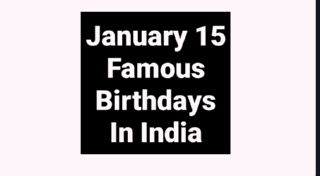 Bhanu Priya is an Indian actress. She was a former leading actress of the Telugu, Tamil, Kannada and Malayalam film industries from 1980 to 1993. She also acted in few Bollywood films in the 1990s. She was born in Rangampeta village, which is near to Rajamundry, Andhra Pradesh, on 15 January 1966 in a Telugu family and was settled in Chennai.

Kumari Mayawati (Hindi: मायावती; born 15 January 1956) is an Indian politician who is a former Chief Minister of Uttar Pradesh. She heads the Bahujan Samaj Party, which represents the Bahujans or Dalits, the weakest strata of Indian society. She completed four terms as Chief Minister of Uttar Pradesh, but lost the 2012 legislative assembly elections to the rival Samajwadi Party.

Pritish Nandy (born 15 January 1951) is a Indian poet, painter, journalist, politician, media and television personality, animal activist and film producer. He is Bengali by ethnicity. He was member of Rajya Sabha, the upper house of the Indian parliament representing Maharashtra based party Shiv Sena. He has published a number of poetry books in English.

Guru Ravidass (also Raidas, Rohidas and Ruhidas in eastern India) was a North Indian Sant mystic of the bhakti movement who was active in the 15th century CE. Venerated in the region of Uttar Pradesh as well as the Indian state of Maharashtra, his devotional songs and verses made a lasting impact upon the bhakti movement. He is often given the honorific "Bhagat" or "Sant".

Torin Thatcher (15 January 1905 – 4 March 1981) was an English actor born in Bombay, British India, to English parents. He was an imposing, powerfully built figure noted for his flashy portrayals of screen villains. He was educated in England at Bedford School and at the Royal Academy of Dramatic Art. He worked as a schoolmaster before first appearing on the London stage in 1927.

Subimal Goswami (January 15, 1938 - ) commonly known by his nickname Chuni Goswami is an Indian international footballer and first class cricketer. He was born in Kishoreganj District of undivided Bengal (now in Bangladesh). As a striker, he played 50 international matches representing India. As a first class cricketer, he played Ranji Trophy for Bengal.

Alyssia Vibha Sharma is an Indipop star who released her first album in the 1990s. She made her foray into Indian pop domain with her debut album Mehandi (2000), HMV SaReGaMa Records, which was extremely well received by the music lovers and was one of the top 3 best selling private albums of that year. Its title song "Mehandi Lagaoongi Main" became a hit.

Bal Govind Dwivedi (born January 15, 1948 Rari Khurd, Rari Bujurg, Fatehpur, U.P.) is a prolific Hindi poet. His father is Shri Ram Pyare Dwivedi, and mother is Smt Kamala Dwivedi. Dr. Dwivedi was born in a ideal Brahmin family. He graduated in Mathematics from Kanpur University. He has started his carrier as a Lecturer of Mathematics in S.N.J.V Inter College, Krishna Nagar, Kanpur, U.P.

Dhina born on 15 January 1966) is an Indian film composer and television series composer from Tamil Nadu, India. Dhina first worked as an assistant musician under popular composer G. K. Venkatesh, later being engaged by Meastro Ilaiyaraaja as a music conductor. He later became a music director for several Tele serials scoring for the title tracks.

Giani Gurmukh Singh Musafir (15 January 1899-18 January 1976) was an Indian politician and Punjabi writer. He was the Chief Minister of Punjab from November 1, 1966 to March 8, 1967. He was awarded the Sahitya Akademi Award in Punjabi, given by Sahitya Akademi, India's National Academy of Letters in 1978 for his short story collection.

Tripuraneni Ramaswamy (January 15, 1887 – January 16, 1943) was a lawyer, playwright and reformer active among the Telugu-speaking people. He was part of a growing movement in India to reassess the culture of India. This movement included such people as Ram Mohan Roy, Eswara Chandra Vidya Sagar, Ranade, Dayanand Saraswathi, Kandukuri Veeresalingam and Gurazada Appa.

Bruce McRae (January 15, 1867, India - May 7, 1927 City Island, New York, was an American stage and early silent film actor. Born in India in 1867 he entered acting as a stage actor. He was the first actor to play Dr. Watson to William Gillette's Sherlock Holmes. For several years, 1903-1908 he worked as leading man to the young Ethel Barrymore.

Honappa Bhagavatar/C. Honnappa Bhagavathar (January 15, 1916 - October 10, 1992), was a Kannada - Tamil theater artist, film actor, producer, musician, singer. He was a renowned singer and sang many songs. He was one of the pioneers of Kannada Cinema. His son Bharath Bhagavathar was also an actor who worked in Kannada Films

Gurdev Singh (born 15 January 1948) is an Indian-born musician based in London who plays the plucked string instrument sarod. Singh studied under sarod player Amjad Ali Khan, can play the instrument dilruba, and sings Hindustani classical music. He performed on the 1993 album Fate of Nations by English rock singer Robert Plant. Singh has played internationally and taught students in England.

Lily Chakraborty, (born 15 January 1972) is a prominent Indian Ghazal singer, Bengali Poet and Composer. She is considered as one of the best Ghazal singer in India. Her style and variations in singing Ghazals has been noted as unique, as she blended Modern music with ghazals, unlike any other Ghazal singer. She is highly popular in Pakistan, India, Bangladesh.

Predhiman Krishan Kaw is an Indian plasma physicist, who is currently the director of the Institute for Plasma Research. He was born on January 15, 1948 at Srinagar(Jammu and Kashmir), India. He did his matriculation from Punjab University(1958) and completed his M.Sc. from Agra University in 1964.He received PhD from Indian Institute of Technology, Delhi in 1966 under Supervision of Prof.

The Reverend Dr. K. David was a Pastor, a New Testament Scholar, a Bible Translator and an able Administrator. He was a member in the Society for Biblical Studies in India (SBSI) incorporating Biblical Scholars belonging to the Catholic and Protestant traditions. He was also elected as the office bearer of the SBSI and was later elected to the post of President. Rev.

Tilak Raj (born January 15, 1960 in Delhi) is a former Indian cricketer who played for Baroda and Delhi. He was a left-hand batsman who is best known for being the unfortunate victim of Ravi Shastri's six sixes in an over in 1985. It was only the second instance of this in first-class cricket.