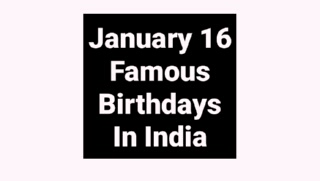 Sidharth Malhotra (born 16 January 1985)is an Indian actor who appears in Hindi films. Malhotra began a career as a model at the age of 18. Dissatisfied by the Career, he went on to work as an assistant director to Karan Johar in the 2010 film My Name Is Khan. He made his acting debut with a leading role in Johar's teen drama Student of the Year

Kabir Bedi is an Indian television and film actor. His career has spanned three continents including India, the United States and many European countries in three mediums: film, television and theatre. He is noted for his role as Emperor Shah Jahan in Taj Mahal: An Eternal Love Story. He is best known in Europe for playing the pirate Sandokan in the highly popular TV

Justice Mahadev Govind Ranade (18 January 1842 – 16 January 1901) was a distinguished Indian scholar, social reformer and author. He was a founding member of the Indian National Congress and owned several designations as member of the Bombay legislative council, member of the finance committee at the centre, and the judge of Bombay High Court.

Nanabhoy "Nani" Ardeshir Palkhivala (January 16, 1920 – December 11, 2002) was an Indian jurist and economist. Nani Palkhivala was born in 1920 in Bombay to blue collar, middle-class Parsi parents. His family name derives from the Career of his forefathers (a common practice among Parsis), who had been manufacturers of palanquins ("palkhis"). He was educated at Masters Tutorial High School.

Climax Lawrence (born January 16, 1979 in Margao) is an Indian Careeral Football player. The midfielder is playing for Dempo S.C. in the I-League Lawrence started playing the game when he was 12 years old, in 1998 he signed a contract for Salgaocar SC. At his first season, Salgaocar won the NFL. After five years, Climax joined East Bengal in 2004.

Subhash Mukhopadhyay (Shubhash Mukhopaddhae) (January 16, 1931 - June 19, 1981) was a physician from Kolkata, India, who created the world's second and India's first child using in-vitro fertilisation, Durga who was born 67 days after the first IVF baby in United Kingdom. Unfortunately, he was harassed by the West Bengal government.

Tariq Anwar (born January 16, 1951) is the general secretary of the Nationalist Congress Party of India. He is presently a Member of the Parliament of India representing Maharashtra in the Rajya Sabha, the upper house of the Indian Parliament.

Sanjay Dina Patil (born 16 January 1969) is an Indian politician and a current member of 15th Lok Sabha from Mumbai North East constituency in Maharashtra state in India. He was elected to the 15th Lok Sabha as a Nationalist Congress Party candidate in May 2009 general elections.

Guru Chenganoor Raman Pillai, also spelt Chengannur Raman Pillai, (1886–1980) was a celebrated Kathakali artist from Kerala in south India. He was known for his brilliant portrayal of the anti-heroic Kathi roles on stage, and was a palace dancer to the Travancore Maharaja in a career spanning almost 65 years. Raman Pillai, born in Chenganoor on 16 January 1886, was a specialist in the Kathakali.

Ranjit Singh Sarkaria (January 16, 1916 – September 12, 2007) was an Indian Supreme Court justice from September 17, 1973 until January 15, 1981. Sarkaria was born on January 16, 1916. He attended Mahendra College in Patiala and later obtained an LL.B. from the Government College Lahore, in what is now Pakistan. Upon obtaining a law degree Shri Sarkaria worked in Patiala as a pleader.

Tejinder Pal Singh (born 16 January 1978), in Amritsar is an Indian first class cricketer. An allrounder who bowls slow left arm orthodox and bats left-handed, Tejinder has toured with India A and took 6 wickets and made 181 runs in the Top End series in Australia.