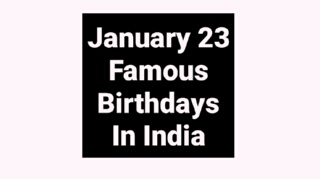 Subhas Chandra Bose  23 January 1897 – 18 August 1945 ( Unconfirmed ) popularly known as Netaji was an Indian revolutionary who led the Axis supported Azad Hind forces against the Allied powers during World War II. Bose was one of the most prominent leaders of the Indian independence movement. The son of a wealthy and prominent Bengali lawyer.

Bal Keshav Thackeray (born 23 January 1926), popularly known as Hinduhriday Samraat Balasaheb Thackeray, is an Indian politician, founder and chief of the Shiv Sena, a right-wing Hindu nationalist, and Marathi ethnocentric party active mainly in the western Indian state of Maharashtra. Born in Pune, Thackeray began his Careeral career as a cartoonist with the English language daily.

Nirosha (born January 23, 1971) is a Tamil, Telugu film actress. She started her career with the Tamil movie Agni Natchathiram in 1988. Nirosha is the daughter of the late Tamil actor and comedian, M. R. Radha (Mohan Rajagopala Radhakrishnan Naidu). She has an elder sister named Radhika who is also a famous actress.

Abdur Razzaq (born 23 January 1942), popularly called Razzak, is a thespian Bengali movie actor. He became famous as a film hero in the mid 1960s. Throughout the rest of the decade, as well as in 1970s, Razzak was considered as the top actor in Bangladeshi movie industry that is popularly known as Dhallywood. Razzak was born in Kolkata, Bengal, (now in West Bengal)

Mahesh Gawli (born on 23 January 1980 in Goa) is an Indian footballer. Gawli began playing football at the age of eight as a holding midfielder for Assumpta High School. He was selected for the Goa U-12 side that beat Japan U-12 side at home. Thereafter he was selected for SAI camp at Gandhinagar but he opted to join Goa for further training. He was trained by Mr. I.P.

Gnana Rajasekaran (b. January 23, 1953, Pallikonda, Tamilnadu,) is an Indian filmmaker, screenwriter and playwright. His directional debut was ‘Mogamul’ in 1994 which won the Indra Gandhi Award for Best First Film. He has also created Bharathi (2000) and Periyar (2007). Rajasekaran has won four National awards, three Tamilnadu state awards, and his movies have been screened at international film festival.

Devajyoti Ray (Born in 1974) is an Indian painter and installation artist whose works attained significance in the post-liberalization phase of Indian economy. His works have been exhibited internationally and have been acquired by many art academies. Devajyoti Ray is primarily known for his particular genre of work called Pseudorealism.

Barun Sengupta (23 January 1934 – 19 June 2008), the founder-editor of Bartaman newspaper, was a Bengali journalist and popular political critic. He is remembered for his bold and simple diction of political analyzing that made him extremely well liked among the common readers in West Bengal. Son of Nirmalananda Sengupta and Ranibala Devi, Barun Sengupta.

Amiya Charan Banerjee (23 January 1891 – 31 May 1968) was an Indian mathematician. His father Gyan Chandra Banerjee was a meritorious student of Presidency College and was a class mate of Narendranath Dutta (later Swami Vivekananda) when they studied law. He belonged to the zemindar family of Maheshtala in 24 Parganas district, now in West Bengal.

T. S. Nagabharana is an Indian filmmaker in the Kannada film industry. He has been the recipient of international, national, state and other awards for 20 of his 30 Kannada movies in the last 26 years. He holds a degree in in Science and Law. He was also selected as the Chairman of Karnataka Chalanachitra Academy, Bangalore [Government of Karnataka] (State Film Academy).

Swapan Sadhan Bose (born 23 January 1948) is an Indian politician from All India Trinamool Congress is presently a Member of the Parliament of India representing West Bengal in the Rajya Sabha, the upper house of the Indian Parliament. He is also the Honorary president of the Mohun Bagan Athletic Club. He is also a member of the Federation International Football Association (FIFA)

Peary Charan Sarkar (1823–1875), spelled Pyari Churn Sircar or Pyari Charan Sarkar in contemporary documents, was an educationist and textbook writer in nineteenth century Bengal. His series of Reading Books introduced a whole generation of Bengalis to the English language, sold in the millions and were translated into every major Indian language. was also a pioneer of women's education in Bengal .

Vikram Verma (born 23 January 1944) is a political leader of Bharatiya Janata Party in Madhya Pradesh, India. He was born in the village Dharampuri of Dhar district in Madhya Pradesh. He was born in a Hindu Jat family of Khadagdania clan. His father’s name is Ganpat Singh Verma. He married Shrimati Neena Verma on 22 June 1978. Shrimati Neena Verma is an MLA from Dhar, Indore.

Official website of Sangeeta Kalanidhi Dr Rallapalli Sharma Sangita Kalanidhi Rallapalli Anantha Krishna Sharma  (23 January 1893 - 11 March 1979) was a noted composer of Carnatic music, singer as well as a writer. Born on 23 January 1893 at Rallapalli village in Kambadur mandal of Anantapur district, he was educated in Sanskrit, Telugu and Music by his parents.