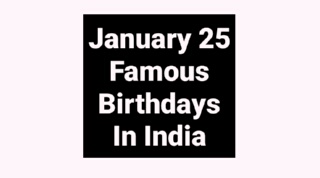 Kavitha Ranjini, better known by her stage name Urvashi is an Indian film actress and producer. She was a prominent lead actress during the 1980s and 1990s in Malayalam, Tamil, Kannada, and Telugu films. She has dubbed in her own voice in all these languages. And she produced the film Pidakkozhi Koovunna Noottandu (1994). She won the National Film Award for Best Supporting Actress.

Kavita Subramaniam née Kavita Krishnamurthy (born Sharada Krishnamurthy on 25 January 1958) is one of the Indian film playback singers. Trained with classical music, she has sung a wide range of classical-based songs, as well as performed with classical maestros such as Pandit Jasraj and M. Balamurali Krishna. In her career, she has worked with a variety of music composers, including R. D. Burman.

Emily Haines (born 25 January 1974 in New Delhi, India) is a Canadian indie rock singer-songwriter. She is the lead singer and keyboardist of the band Metric and a member of Broken Social Scene. As a solo artist, she performed with her own name and under the moniker Emily Haines & The Soft Skeleton. Born in New Delhi, India, and raised in Cache Bay, Ontario, Emily Haines grew up as a dual citizen.

Ramabai Ranade (January 5, 1862 – 1924) was an Indian womens' rights activist. Ramabai Ranade was an active social worker of 19th century. Many people tried to stop her from learning as in older India, Women were not allowed to study.She had a child marriage at the age of 11. Rama had two brothers. After marrying Justice Mahadev Govind Ranade, Ramabai studied Marathi, English and Bengali.

Ashwin Sanghi (born January 25, 1969) is an Indian write. He has written several books on thriller fiction based on historical, theological and mythological themes. He is one of the Indian conspiracy fiction and is part of a broader trend of retelling Indian history or mythology in a contemporary context. Sanghi completed his schooling at the Cathedral & John Connon School, graduated with a BA.

Rupam Islam (born 25 January 1974) is a playback singer, song writer, composer and the lead singer of the band Fossils. He is a recipient of National Film Award for Best Male Playback Singer. He won the award in 2010, for his work in the film Mahanagar @ Kolkata. Rupam has been selected to be a member of the Government of West Bengal's cultural committee for music (Bangla Sangeet Academy).

Cheteshwar Arvind Pujara (born 25 January 1988, in Rajkot, Gujarat) is an Indian Test cricketer. He is a right-handed batsman. Pujara has the distinction of hitting three triple centuries within a span of one month, although only the last of these was in a first-class match. In December 2008, the BCCI awarded him a D-grade national contract. In the Indian Premier League, he plays for Royal Challenger Bengaluru.

Moirangthem Gouramangi Singh is an Indian Careeral association football player who plays as a centre back for I-League team Prayag United. A product of the Tata Football Academy, he has plied his trade with many clubs in the country including Dempo SC and is currently playing for Churchill Brothers. While at Dempo, Singh won the Federation Cup and the National Football League.

Bibek Debroy (born 25 January 1955) is an Indian economist. Since March 2007, he has been professor at Centre for Policy Research, New Delhi. He has also been Visiting Honorary Senior Research Fellow for Institute for South Asian Studies in National University of Singapore from May 2009. Debroy studied at Ramakrishna Mission Narendrapur, Presidency College of the University of Calcutta, Delhi School.

Shri Pyarimohan Mohapatra (born 25 January 1940), a politician from the Biju Janata Dal, is a Member of the Parliament of India representing Orissa in the Rajya Sabha, the upper house of the Indian Parliament. He is the political advisor of Mr Naveen Patnaik. He started his career as an IAS officer and was personal secretary to Mr Biju Patnaik.

Michael Stephen Anthony McEvoy (born 25 January 1956) is an Indian-born former English cricketer who played first-class and List A cricket between 1976 and 1990, with the bulk of his career being between 1980 and 1984. He was playing for the Essex Second XI at the age of 17, but his debut in major cricket was in a County Championship match against Middlesex in August 1976; he scored 18 and 13.

Aiyalam Parameswaran Balachandran (born January 25, 1938) is an Indian theoretical physicist well known for his extensive contributions to the role of classical topology in quantum physics. He has been the Joel Dorman Steele Professor of Physics in Syracuse University since 2000. He has also been a Fellow of the American Physical Society.

Tan Singh (born January 25, 1924) was an Indian politician and a member of the Lok Sabha twice. He founded Shri Kshatriya Yuvak Sangh, a radical organisation for young Rajputs. He remained a Member of the Legislative Assembly of Rajasthan state as well, before entering the Indian Parliament.

Shri Harish Kumar Gangwar was Member of Parliament in the seventh Lok Sabha from Pilibhit Constituency elected in 1980 on Indian National Congress ticket ticket. Shri Harish Kumar Gangawar was son of Shri Baldev Prasad Gangwar, who was Agriculturist by Career in Teolia Village, comes under limits of Bareilly district, Uttar Pradesh. Gangwar did his primary school from Teolia Village.