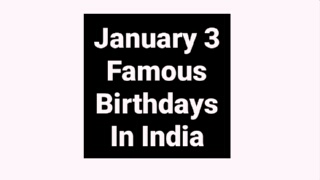 Sanjay Khan (Hindi: संजय ख़ान) is an Indian actor, director and producer. Abbas Khan made his debut in the 1964 Chetan Anand film "Haqeeqat" followed by the Rajshri film Dosti. In the 1960s and 1970s Khan starred in the movies Dus Lakh, Ek Phool Do Mali and Intaqam. He also acted opposite his brother Feroz in three films Upaasna (1971), Mela (1971) and Nagin (1976).

Gul Panag (born 3 January 1977; Chandigarh, India) is an Indian actress, voice actress, model, and former beauty queen who competed in the Miss Universe pageant. Her notable films include Dor, Dhoop, Manorama Six Feet Under, Hello, and Straight. Gul started her education in Sangrur, in Punjab. However, her father's army career ensured that.

Naresh Iyer (born 3 January 1981) is a playback singer from Chennai, India. Naresh Iyer has rendered film songs in several Indian languages and has several chart hits to his credit. His rendition of "Roobaroo" from the movie Rang De Basanti composed by A. R. Rahman topped the music charts for many weeks in 2006 and won him the National Film Award for Best Male Playback Singer.

Jaswant Singh (born January 3, 1938) is an Indian politician and Member of Parliament from Darjeeling parliamentary constituency. He is from Jodhpur in the Indian State of Rajasthan and was an officer in the Indian Army in the 1960s and is an alumnus of Mayo College and the National Defence Academy (India), Khadakwasla.

Navaneet Kaur (also spelled Navneeth Kaur or Navaneeth Kaur; born January 3, 1986) is an Indian film actress who mainly acts in Telugu films. Kaur was born and brought up in Mumbai, Maharashtra, India. Her parents are of Punjabi origin; her father was an army official. After finishing 12th class, she discontinued her education and began working as a model.

Sathyan Anthikad is an Indian film director and screenwriter known primarily for his family based Malayalam films. He has created many critical and commercially successful films, especially when working with Sreenivasan as the scriptwriter. His popular films include T. P. Balagopalan M.A. (1986), Nadodikkattu (1987), Varavelpu (1989), Mazhavilkavadi (1989), Sasneham (1990), Sandesam (1991)

Anchal Joseph (born January 3, 1987) is an Indian-American fashion model and actress. She competed on America's Next Top Model, Cycle 7. Joseph was the 6th contestant to be selected to participate on the seventh cycle of America's Next Top Model and was told at casting by host Tyra Banks that she was one of the most physically beautiful contestants to ever participate in the competition.

Vipasha Agarwal (born 3 January 1985) is an Indian model and actress who made her debut in the movie I See You with Arjun Rampal. She is not very active in the media but has a varied portfolio when it comes to print the advertisements. She's worked with The Taj Group, Lakme, Thumbs up, and Ritu Kumar. Recently she has done advertisements like Fair & Lovely, Lakme (winter collection)

Janaki Ballabh Patnaik (born January 3, 1927) is an Indian politician who has been Governor of Assam since 2009. A leader of the Indian National Congress, he was Chief Minister of Orissa from 1980 to 1989 and again from 1995 to 1999, holding that post for the longest time on record. After the completion of his early education at Khurda High School.

Chetan Sharma (born 3 January 1966) was a medium pace bowler born in a Brahmin family who was a member of Team India. Sharma was coached by Desh Prem Azad, a Dronacharya Award winner, who was also the mentor of Kapil Dev. Despite being only 5' 3" tall, the bearded Sharma was one of the fastest bowlers in India during the 1980s.

Jaipal Singh Munda (January 3, 1903 – March 20, 1970) was a Munda tribal man, who captained the Indian field hockey team to clinch gold in the 1928 Summer Olympics in Amsterdam. He is well known for his sportsmanship and political skills. Later he emerged as a sole leader of Adivasi cause and creation of a separate home land for adivasis of central India.

S.N. Balagangadhara is professor at the Ghent University in Belgium and directs the Research Centre Vergelijkende Cutuurwetenschap (Comparative Science of Cultures). He was a student of National College, Bangalore and moved to Belgium in 1977 to study philosophy at Ghent University, where he obtained his doctorate under the supervision of Prof.

K. K. Mathew (3 January 1911 - 2 May 1992) was a Judge of the Supreme Court of India highly regarded for his scholarship and for his seminal contribution to the Constitutional and Administrative law in India. He later served the nation as its Tenth Law Commission Chairman and also as the Chairman of the Second Press Commission.

Moirangthem Govin Singh (born 3 January 1988 in Tentha, Manipur, India) is an Indian footballer who plays as a defender for Shillong Lajong of the I-League and represents India at the national level. He was part of the Churchill Brothers S.C. squad that won I-League 2008-09. He has been called up to the Indian team several times but is yet to make his debut.

Ghulam Murtaza Urdu: (Born:January 3, 1939), (SI(C) Ph.D., DIC, D.Sc., FPAS), is a Pakistani plasma physicist and mathematician. He is the Professor of Theoretical and Plasma physics, and the director of the Physics research institute, known as the Abdus Salam Chair in Physics, at the Government College University.

Gopal Raju (January 3, 1928 – April 10, 2008) was an Indian-born American publisher, editor, journalist, businessman and philanthropist. He was considered to be a pioneer of Indian American ethnic media in the United States. Raju launched the first successful Indian newspaper in the U.S., India Abroad, in 1970.

Mel Colm-Cille Gerard Gibson, AO (born 3 January 1956) is an American actor, film director, producer and screenwriter. He was born in Peekskill, New York, moved with his parents to Sydney, Australia when he was 12 years old, and later studied acting at the Australian National Institute of Dramatic Art. After appearing in the Mad Max and Lethal Weapon series.

John Ronald Reuel Tolkien, CBE (3 January 1892 – 2 September 1973) was an English writer, poet, philologist, and university professor, best known as the author of the classic high fantasy works The Hobbit, The Lord of the Rings, and The Silmarillion. Tolkien was Rawlinson and Bosworth Professor of Anglo-Saxon at Pembroke College, Oxford, from 1925 to 1945.

Asa Akira (born January 3, 1986) is the stage name of a Japanese-American pornographic actress and model. Born in New York City, Akira lived in Japan between the ages of 6 and 13 where she attended American schools. In 2006–07 she was a regular on the Bubba the Love Sponge radio show and was known as the "Show Whore."

Michael Schumacher (German pronunciation: [ˈmɪçaʔeːl ˈʃuːmaxɐ] ( listen); born 3 January 1969) is a German Formula One racing driver for the Mercedes team. Schumacher is a seven-time World Champion and is widely regarded as one of the greatest F1 drivers of all time. He holds many of the formula's driver records, including most championships, race victories, fastest laps, pole positions.

Elisha Nelson "Eli" Manning (born January 3, 1981) is an American football quarterback for the New York Giants of the National Football League. He is the son of former NFL quarterback Archie Manning and the younger brother of Denver Broncos quarterback Peyton Manning. Manning played college football at the University of Mississippi

Danica Mae McKellar (born January 3, 1975) is an American actress, academic, and education advocate. She is best known for her role as Winnie Cooper in the television show The Wonder Years, and later as author of three popular non-fiction books: Math Doesn't Suck, Kiss My Math, and Hot X: Algebra Exposed, which encourage middle-school girls to have confidence and succeed in mathematics.

Dan Harmon (born January 3, 1973) is a writer and performer. He is the creator and former executive producer for the NBC television comedy series Community, and, along with Rob Schrab, a founder of the alternative television network/website Channel 101.

Victoria Principal (born January 3, 1950) is an American actress, author and businesswoman best known for her role as Pamela Barnes on the CBS night-time TV drama Dallas from 1978 to 1987. Principal was born in Fukuoka, Japan, the eldest daughter of United States Air Force sergeant Victor Principal, after whom she was named and who was then stationed in Fukuoka.

Nicole Beharie (born January 3, 1985) is an African-American actress. Beharie was born in West Palm Beach, Florida. She attended Orangeburg Wilkinson High School in Orangeburg, South Carolina, and is 2003 graduate of the South Carolina Governor's School for the Arts & Humanities, a public residential high school in Greenville.

Lloyd Polite, Jr. (born January 3, 1986), who performs under the mononym Lloyd, is an American R&B recording artist, who experienced as a member of the group N-Toon before embarking on a solo career in 2004. In 2004, he released his solo debut single, "Southside" the title track of his debut album, Southside.

Sylvia Marie Likens (January 3, 1949 – October 26, 1965) was an American murder victim from Indiana. She was tortured to death by Gertrude Baniszewski (née Van Fossan), Gertrude's children, and other young people from their neighborhood.

Ngô Đình Diệm ( listen; 3 January 1901 – 2 November 1963) was the first president of South Vietnam (1955–1963). In the wake of the French withdrawal from Indochina as a result of the 1954 Geneva Accords, Diệm led the effort to create the Republic of Vietnam. Accruing considerable U.S. support due to his staunch anti-Communism, he achieved victory in a 1955 plebiscite, which was fraudulent.

Stephen Arthur Stills (born January 3, 1945) is an American guitarist and singer/songwriter best known for his work with Buffalo Springfield and Crosby, Stills & Nash (and Young). He has performed on a Careeral level in several other bands as well as maintaining a solo career at the same time.

Robert Loggia (born Salvatore Loggia; January 3, 1930) is an American actor and director. Loggia, an Italian American, was born on Staten Island, the son of Benjamin Loggia, a shoemaker, and Elena Blandino, a homemaker, both of whom were born in Sicily, Italy.