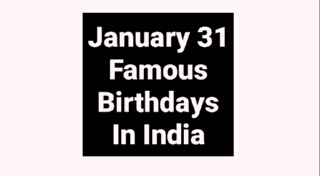 Preity Zinta born 31 January 1975) is an Indian film actress. She has appeared in Hindi films of Bollywood, as well as Telugu, Punjabi and English language films. After graduating with a degree in criminal psychology, Zinta made her acting debut in Dil Se.. in 1998 followed by a role in Soldier the same year. These performances earned her a Filmfare Award.

Not to be confused with Amrita Rao Amrita Arora (born 31 January 1981) is a Bollywood actress. Arora was born in Chembur to Joyce Polycarp and Anil Arora. She attended Loreto Convent, Chembur.Mumbai. Her sister is Malaika Arora Khan. She has a son named Azaan who was born in 2010. In 2012, she said that she was expecting her second child. Arora made her Bollywood debut in 2002 opposite Fardeen Khan.

Dattatreya Ramachandra Bendre(Kannada:ದತ್ತಾತ್ರೇಯ ರಾಮಚಂದ್ರ ಬೇಂದ್ರೆ ; Marathi: दत्तात्रेय रामचंद्र बेंद्रे) (31 January 1896 – 21 October 1981) was amongst the most famous of Kannada poets of the Navodaya Period. Praised as varakavi, literally 'gifted poet', he was the second person among eight recipients of Jnanpith Award for Kannada, the highest literary honour conferred in India.

Major Som Nath Sharma (1923–1947) was the first recipient of the Param Vir Chakra, the highest Indian gallantry award. He was awarded the medal posthumously for his bravery in the Kashmir operations in November 1947. He died while evicting Pakistani infiltrators and raiders from Srinagar Airport during the Indo-Pak war of 1947-48 in Kashmir. He belonged to the 4th Kumaon Regiment.

Shastriji Maharaj (31 January 1865 – 10 May 1951), born Dungar Patel and ordained Shastri Yagnapurushdas, was the third spiritual successor of Swaminarayan in the BAPS Swaminarayan Sanstha. Born in a family of farmers in central Gujarat, India, he became a sadhu within the Vadtal diocese of the Swaminarayan Sampraday at the age of 17 where he was given the name Yagnap.

N. Vittal (born 31 January 1938), belonging to the Indian Administrative Service 1960 batch, is one of the eminent public servants of India, who has held important positions in the Government of India, most prominent of which was that of the Central Vigilance Commissioner. A Maharashtrian, he was born in Thiruvananthapuram, the capital of the Indian state of Kerala, and was educated in Tiruchirapa.

Umar Alisha (born January 31, 1966) is the 9th head (peethadhipathi) of Sri Viswa Viznana Vidya Adhyatmika Peetham. He became head of this 535-year old institution on 1989-09-09, succeeding his father, Mohiddin Badusha II. Alisha is the chairman of the Umar Alisha Rural Development Trust and the Umar Alisha Sahithi Samithi. Alisha is also a poet, writing in the Telugu language

Amikar Dayal ( born 31 January 1967 in Patna, India) is an Indian cricketer. He captained India's Under 19 Test team on 3 occasions and has played at first-class level for Jharkhand and Tripura.

George Godfrey Massy Wheeler VC (31 January 1873 – 13 April 1915) was a recipient of the Victoria Cross, the highest and most prestigious award for gallantry in the face of the enemy that can be awarded to British and Commonwealth forces. He was Major in the 7th Hariana Lancers, British Indian Army, during World War I. On 12 April 1915 at Shaiba, Mesopotamia,