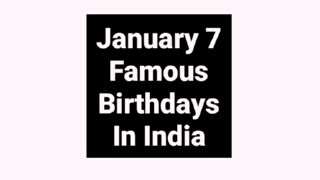 Bipasha Basu (born 7 January 1979) is an Indian actress who appears in Hindi language films. She has also worked in Telugu, Bengali and Tamil language films. She had a successful modeling career before venturing into films. She debuted in a negative role in Ajnabee (2001) which earned her the Filmfare Award for Best Female Debut. Her first commercial success was Raaz (2002)

Reena Roy (born 7 January 1957) was one of the top Hindi film actresses in India. She performed leading roles in many films from 1972 to 1985 . Reena Roy was the third daughter of a Muslim father and a Hindu mother. Her parents divorced after having four children together. She started acting in films in her early teens to support her mother and siblings.

Shobha Rajadhyaksha, also known as Shobhaa Dé (born 7 January 1948), is an Indian columnist and novelist. Shobha De was born in a Maharashtrian Goud Saraswat Brahmin family in Mumbai, India. She completed her schooling from Queen Mary School, Mumbai and graduated from St. Xavier's College, Mumbai with a degree in psychology.

John Prakasa Rao Janumala, famously known as Johnny Lever born January 7, 1950 in Ossalapalle, Prakasam District, Andhra Pradesh, is an Indian film actor and one of the most popular comedians in Hindi cinema. He was born to Prakash Rao Janumala and Karunamma Janumala and brought up in Mumbai. He began his career in 1984, and has acted in more than 300 Bollywood films since.

Supriya Pathak Kapoor (born 7 January 1961) is an Indian actress hailing from a long line of performers. She is famous for her role in the Indian sitcoms Khichdi and Idhar Udhar. Supriya Pathak is daughter of Dina Pathak, a well known character actress famous for playing mother and grandmother roles during the 1980s and 1990s. Her sister Ratna Pathak Shah is also an actress.

K. Bhagyaraj (born 7 January 1951) is a Tamil film director, actor, writer and producer. He has directed and produced several Tamil films, along with a few Telugu and Hindi films. He is well known for his mastery in screenplay. He won a Filmfare Best Actor Award for Mundhanai Mudichu, a film he wrote, directed and starred in.

Gerald "Gerry" Malcolm Durrell, OBE (January 7, 1925 – January 30, 1995) was a naturalist, zookeeper, conservationist, author and television presenter. He founded what is now called the Durrell Wildlife Conservation Trust and the Jersey Zoo (now Durrell Wildlife Park) on the Channel Island of Jersey in 1958.

Koena Mitra born 7 January 1984) is an Indian actress and model who appears in Bollywood films. Mitra was born in Kolkata, West Bengal to a Bengali Hindu family. She attended South Point High School and Lady Brabourne College of the University of Calcutta. She has a major in psychology. Mitra was trained with the Mamata Shankar ballet troupe for 12 years.

sarojadevi home page B. Saroja Devi is an Indian actress. She has acted in Kannada, Tamil, Telugu and Hindi movies. She is referred to as "Abinaya Saraswathi" by Kannada film industry and as "Kannadathu Paingili" (meaning Kannada's Parrot) by Tamil Film Industry. She has acted in nearly 200 films in a period of more than three decades.

Varun Badola (born 7 January 1974 in New Delhi) is an Indian actor, known largely for his roles on television. His father is a known artist, Vishwa Mohan Badola. He has 2 sisters — Alka (elder) who is married and has appeared in KumKum, and Kalindi (elder), who is a radio jockey. He did his schooling from Sardar Patel Vidyalaya in New Delhi. Badola spent his childhood in Ahmedabad.

Jamila Massey (born 7 January 1934) is an Indian actress and writer. Massey has had a long career on UK television and radio. She is possibly best known for playing Auntie Satya in the long running radio soap The Archers, Jamila Ranjha in Mind Your Language, and her role as Neelam Kapoor in EastEnders. Massey came to the United Kingdom with her parents in 1946 at the age of 12.

Aditi Singh Sharma is an Indian singer. She made her playback singing debut in Anurag Kashyap's Dev D.

Babasaheb Neelkanth Kalyani is an Indian businessman who serves as the chairman and managing director of Bharat Forge, the flagship company of the Kalyani Group and the world's second-largest forgings manufacturer after ThyssenKrupp of Germany. Baba kalyani was born on 7 January 1949 to Sulochana and Neelakanth Kalyani, a Pune based technocrat and maker of auto components.

Vikram Chandra is the Group CEO & executive director of NDTV Group and is an anchor for the Big Fight, Gadget Guru, and the Nine o'clock news. He completed his schooling from The Doon School. He did his Bachelors in Economics from St. Stephen's College, Delhi and went on to study at Oxford on an Inlaks Scholarship.

Mamata Shankar (born 7 January 1955) is an actress in the Bengali language film industry of India. She has acted in films by renowned film directors including, Satyajit Ray, Mrinal Sen, Rituparno Ghosh, Buddhadev Dasgupta and Gautam Ghosh. In addition to being an actress, she is a dancer and choreographer. She is the daughter of legendary dancers Uday Shankar and Amala Shankar.

Gulam Abbas Moontasir (born 7 January 1942) is Careeral basketball player from India . Born in Mumbai, he began playing at the age of nine at the courts at Nagpada in central Mumbai. He studied at Mumbai's Antonio D'Souza School and D.G. Ruparel College . Moontasir played for his school, college, Bombay University and the Maharashtra State, in turn.

Krishnan Sasikiran (born January 7, 1981) is an Indian chess Grandmaster. Among Indians, he is second, after Viswanathan Anand, No. 3 in Asia and ranked 26th in the world in FIDE rating as on May 2012. "Sasi", as he is sometimes called, comes from Chennai in Tamil Nadu in south-eastern India. He earned the Grandmaster title at the 2000 Commonwealth Championship.

Obaid Siddiqi is a National Research Professor at Tata Institute of Fundamental Research (TIFR) National Center for Biological Sciences. His work includes research on the genetics and neurobiology of Drosophila. He was born in 1932 in Uttar Pradesh and was educated at Aligarh Muslim University and the University of Glasgow.

Ranjeet Ranjan is an Indian politician and was a member of the 14th Lok Sabha of India representing Saharsa, Bihar from the Lok Janshakti Party party. Her She is married to mafia don and politician Pappu Yadav. Ranjeeta Ranjan, born in Bihar, brought up in Jammu, studied in Punjab and settled in Delhi. More still: Her ancestors were Kashmiri Pandit turned Sikhs.

Jnananjan Niyogi was actively associated with the Indian independence movement and was a social reformer. The son of Braja Gopal and Sumangala Niyogi, he was born at Gaya on 7 January 1891. His father had converted to the Brahmo Samaj, under the influence of his maternal uncle, Hari Sundar Bose, and had moved from Berabuchina (now in Tangail District, Bangladesh) to settle initially at Gaya.

V. S. Krishna Iyer (7 January 1922 – 25 July 2011) was an Indian politician and independence movement activist from the state of Karnataka. He had served as a Member of Parliament of 8th Lok Sabha for Bangalore South from 1984 to 1989. Krishna also served as mayor of Bangalore and Minister in the state cabinet before being elected to Lok Sabha.