In this post you will know 8 January's famous birthday personality in India like Bollywood actor, actress, cricketer, politician. January 8 famous birthdays in India 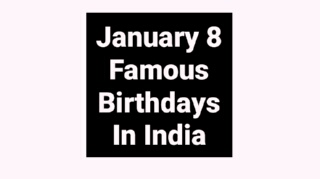 Sagarika Ghatge (born 8 January, 1986) is an Indian film actress best known for her debut role as Preeti Sabarwal in the Bollywood movie, Chak De! India. Ghatge was born in Kolhapur, Maharashtra to a Maratha family. Her father Vijayendra Ghatge is a veteran actor, and she is a descendant of Royal Holkar Dynasty of Indore. Ghatge attended Chatrapati Shahu Vidyalaya School till grade 8.

Nanda (born 8 January 1939) is an Indian film actress of Hindi films and Marathi films. Nanda was born in a Maharashtrian show-business family to Vinayak Damodar Karnataki (Master Vinayak), a successful Marathi actor-director .Her father died when Nanda was a child. The family faced hard times. She became a child artiste and helped them by working in films like Jaggu in the early 1950s.

Tarun Kumar is an Indian film actor who primarily works in Telugu and Tamil cinema. He frequently appears in romantic comedy films. He is the elder son of Oriya actor Chakrapani & noted actress Roja Ramani. He started his acting career under Usha Kiran Movies production, as a child actor.

Nafisa Ali (born 18 January 1957) is an actress and social activist from India. Nafisa Ali was born to photographer, Ahmed Ali, son of S. Wajid Ali and brother of Zaib-un-Nissa Hamidullah. She hails from Faridabad, Haryana. Her mother's name is Philomena Torresan, who is now settled in Australia. Her brother is the Australia-based motor rallyist, Niaz Ali.

Taraka Ratna Nandamuri is an Indian film actor in Telugu cinema, born as "Obulesu". He is the grandson of Veteran Telugu actor N.T. Rama Rao. He was born on January 8, 1983 to Mohanakrishna Nandamuri. 2009 - Nandi Award for Best Villain - Amaravathi.

Fearless Nadia (8 January 1908 – 9 January 1996) was an Indian film actress and stuntwoman, who is most remembered the masked, cloaked adventuress in Hunterwali (The Princess and the Hunter) released in 1935, which was one of the earliest female lead Indian films. Fearless Nadia was born as Mary Ann Evans on 8 January 1908 in Perth, Western Australia.

Harris Jayaraj (born 8 January 1975) is an Indian film composer. He has written scores and soundtracks for Tamil, Telugu and Hindi films. Harris Jayaraj hails from a pious Christian Nadar family from Tirunelveli and was born and brought up in Chennai. Harris studied at Krishnaswamy Matric School, K. K. Nagar. His father, S. M. Jayakumar.

Mohan Rakesh (January 8, 1925 – January 3, 1972) was one of the pioneers of the Nai Kahani ("New Story") literary movement of the Hindi literature in the 1950s. He wrote the first modern Hindi play, Ashadh Ka Ek Din (One Day in Aashad) (1958), which won a competition organized by the Sangeet Natak Akademi. He made significant contribution to novel, short story, travelogue.

Vijayasree (Vijayashree or Vijayasri) was a Malayalam film actress and sex symbol from India in the 1970s. She acted in many movies opposite Prem Nazir. She gained popularity due to her beauty and was considered as the most beautiful actress in the malayalam film history. She was a contemporary of the popular Malayalam actress Jayabharathi.

Ashapoorna Devi also Ashapurna Debi or Asha Purna Devi, is a prominent Bengali novelist and poet. She was born in 8 January 1909. She has been widely honoured with a number of prizes and awards. She was awarded 1976 Jnanpith Award and the Padma Shri by the Government of India in 1976; D.Litt by the Universities of Jabalpur, Rabindra Bharati, Burdwan and Jadavpur.

Bhuma Nagi Reddy (born 8 January 1964) is an Indian politician. He was elected in the byelection to the Andhra Pradesh Legislative Assembly in 1992 following the sudden death of his brother Bhuma Sekhar Reddy a sitting MLA from Allagadda constituency in Kurnool district of A.P. In 1996 he came into limelight when he was chosen as TDP candidate to contest against the then prime minister P.V. Narasi.

Jyotindra Nath Dixit (January 8, 1936 – January 3, 2005), commonly referred as J. N. Dixit, was an Indian diplomat and former Indian Foreign Secretary (1991–1994), the top bureaucratic job in the Ministry of External Affairs. At the time of his death he was the National Security Advisor to the Prime Minister of India and is most remembered for his role as a negotiator in Pakistan and China Dispute.

Neelam Jaswant Singh (born 8 January 1971 in Farmana) is an Indian discus thrower. Her personal best throw is 64.55 metres, achieved at the 2002 Asian Games in Busan. During the 2005 World Championships she tested positive for the banned stimulant pemoline in an in-competition test. In the year 1998, Neelam Jaswant Singh won the bronze medal at the Bangkok Asian Games.

Karanjit Singh (born 1986) is an Indian football player. He is currently playing for Salgaocar S.C. in the I-League in India as a goalkeeper. Karanjit Singh was born on January 8, 1986 at Hoshiarpur, Punjab, India. Karanjit Singh started playing football when he was 15. At one of the local tournaments, he was spotted by the former national coach, Sukhwinder Singh. Subsequently, in 2004.

Srinath Prahlad (born January 8, 1973 in Mysore, India) is a tennis player from India and has represented the country in the Davis Cup. He reached one ATP doubles final partnering fellow Indian Saurav Panja at the 2000 Chennai Open but lost 7–5, 6–1 to Julien Boutter and Christophe Rochus. He is the shortest player in history of tennis in ATP.

K. Sukumaran (8 January 1903 - 18 September 1981) was the Editor of Kerala Kaumudi Daily, the third most circulated newspaper in Malayalam which celebrated its centenary in 2011. He served as the President of Sree Narayana Dharma Paripalana Yogam during 1953-54. K. Sukumaran was born on 8 January 1903 to great reformer, thinker and socio-cultural leader C.V.

Mamidipudi Venkatarangayya M.A. (January 8, 1889 – January 13, 1982) was a multidisciplined person and financial and political scientist and historical writer of Andhra Pradesh, India. He was recipient of Padma Bhushan in 1968 by Indian Government. He was born in Purini village of Kovur taluq in Nellore district in 1889 to Venkatesham and Narasamma.

Dr. Ahmed Mohiuddin (January 8, 1923 – January 4, 1998) was a noted scientist, scholar and researcher of Pakistan. Ahmed was born in Hyderabad, India, where he received his early education from Hyderabad. He obtained his M.Sc. (Biology) from Osmania University in 1945 with distinction. In 1945 he was awarded a Ph.D. scholarship from government.