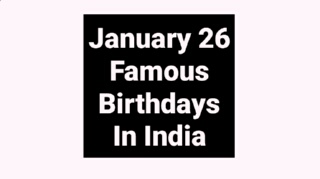 Ravi Teja (born Bhupatiraju Ravi Shankar Raju on 26 January 1968) is an Indian Telugu film actor. He won the Nandi Award for Best Actor for the film Neninthe in 2008. He has acted in other films including Avunu Valliddaru Ista Paddaru, Idiot, Amma Nanna O Tamila Ammayi, Venky, Bhadra, Vikramarkudu, Krishna, Kick, and Mirapakaay. These successful films have established him within a short period of time.

Navdeep (born January 26, 1985 as Navdeep Pallapollu) is a regional Indian actor. Navdeep has appeared in both Telugu and Tamil films, portraying diverse characters. Navdeep's first film appearance was in the 2004 Telugu romantic film, Jai, in which he played an Indian boxer fighting against Laskar-E-Taiba terrorists. In the 2005 Tamil blockbuster Arinthum Ariyamalum.

Maria Goretti was born on 26 January 1972 in Goa, India. She was a popular MTV VJ before marrying actor Arshad Warsi. As of October 2009, she hosts a TV show, Do It Sweet on the NDTV Good Times channel. She was named after Saint Maria Goretti.

Rasool Ellore, also known as Rasool, is a popular Cinematographer, Director and writer in the Indian Film Industry. He is the brother-in-law of famous Tollywood personality S. Gopal Reddy. He made a huge name for himself as a cinematographer for technically sound blockbusters like Gaayam, Gulabi, Chitram and others. He made his debut as a director with the class flick Okariki Okaru.

Dr. K. S. Narasimhaswamy (January 26, 1915 – December 27, 2003) was a prominent poet in Kannada language. His most popular collection of poems Mysooru Mallige has seen more than thirty two reprints and sought as an ideal gift at a wedding to the newly married couple in Karnataka. Narasimhaswamy has been conferred many prestigious awards including Sahitya academy award.

Kirat Bhattal Careerally known as Kirat or Keerath in South India (born 26 January in Monrovia, Liberia) is an Indian film actress. She debuted in modelling roles and then made a breakthrough in the Tamil film industry. After completing her education at the Lawrence School, Sanawar, Kirat debuted in the Safi ad and then went onto to various other campaigns like Fair and Lovely, Siyaram.

Guru Kelucharan Mohapatra (January 8, 1926 - April 7, 2004) was an Indian classical dancer, guru and proponent of Odissi dance, who is credited for the revival of the classical dance form in the 20th century. A Noted Sanskrit poet of India writes on this Guru 'that Saango-paanga-subhangi-laasa-madhuram samteerna-nrutyaarnavam' which means - Each fraction of his dancing.

Nandlal Shivlal Yadav  pronunciation (help·info) (born 26 January 1957, Hyderabad, Andhra Pradesh) is a former Indian cricketer who played in 35 Tests and 7 ODIs from 1979 to 1987. A right arm offbreak bowler, he made his Test debut in 1979 during a rebuilding stage in Indian cricket with their spin quartet breaking up. His debut series, against Australia, was a success with 24 wickets in the five overs.

Shabbir Ali, (born 26 January 1956) is a Indian association football manager and former player. He was awarded the Dhyan Chand Award, the highest award in Indian sports for lifetime achievement, given by Government of India in 2011. As a footballer, Shabbir Ali was rated as the best player in India during the 70s and 80s. Arguably the finest striker of his time.

Major Hugh Glenrinnes Bruce, (26 January 1919 – 9 January 2003), was a prisoner-of-war in Colditz Castle and later commanding officer of the Special Boat Service. Hugh Glenrinnes Bruce was born at Mhow in India, where his father was serving with the Royal Army Medical Corps on attachment to the Indian Army. He was educated at Blundell's School in Tiverton. Bruce joined the Royal Marines in 1937.

Ashish Bagai (born January 26, 1982) is the captain of the Canadian cricket team. He is a right-handed batsman who specializes as a wicketkeeper. He studied at St. Columba's School during his brief stay in Delhi, India. He moved to Canada at the age of 11. His first taste of cricket came in the inaugural Under-15s Cricket World Cup in 1996, in which he was voted the tournament's best wicketkeeper.

Ashok Omprakash Malhotra (born January 26, 1957, Amritsar, Punjab) is a former Indian cricketer who played in 7 Tests and 20 ODIs from 1982 to 1986. In the early 1990s, he was an overseas Careeral at Dunfermline Cricket Club in Fife, Scotland.He

has opened a cricket coaching centre namely Ashok malhotra cricket academy which has around 200 students!

Khanmohammad Cassumbhoy Ibrahim (January 26, 1919 – November 12, 2007) was a former Indian cricketer who played in four Tests from 1948 to 1949. He was born in Mumbai, Maharashtra, and studied in St Xavier's College. He played domestic cricket for Bombay from 1938-39 to 1949-50 as a top-order batsman, occasionally opening the batting.