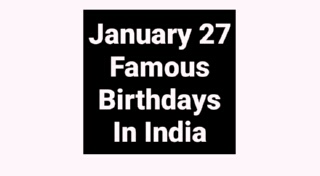 Bobby Deol (born Vijay Singh Deol on January 27, 1969) is a Bollywood actor.Bobby Deol is the son of the acclaimed Bollywood actor Dharmendra and the brother of Sunny Deol, also a successful actor in the Mumbai based Indian film industry. Deol has mostly acted in thriller films, often playing characters who are forced to committ crime to avenge the deaths of loved ones.

Vikram Bhatt (born 27 January 1969) is an Indian film director, producer and screenwriter. He has more than 21 films to his credit. He is also the creative head of a conglomerate called ASA Productions. Vikram is the grandson of Vijay Bhatt{Malik}, one of the pioneer of Indian films, and the son of cinematographer Pravin Bhatt. Bhatt started his career in 1982, at the age of 14.

Shreyas Talpade (born 27 January 1976) is an Indian actor who appears in Marathi and Bollywood films. Talpade was born in Mumbai, Maharashtra, in a Maratha family. He attended Shree Ram Welfare Society's High School in Andheri-West. He is married to Deepti Talpade. Shreyas met his wife Deepti when he went to her college as a celebrity.

Sabu Dastagir (27 January 1924 – 2 December 1963) was a film actor of Indian origin—although he later took American citizenship. He was normally credited only by his first name, Sabu, and is primarily known for his work in film during the 1930s–1940s in Britain and America. Born in 1924 in Karapur, Mysore, Kingdom of Mysore, then a Princely State of British India.

Deepshikha (alternatively spelled Deepshika or Deep Shikha; born 02 September 1977) is an Indian actress. She is best known for her Punjabi films, especially those of Gurdaas Maan. Despite being essentially a Punjabi actress, she made her presence in the Hindi serial Ajnabi along with Danny Denzongpa. She has also appeared in music videos of a number of Punjabi pop songs including Daler Mehndi's songs.

Amar Singh (27 January 1956) is an Indian politician from the state of Uttar Pradesh and one of the founding leaders of Samajwadi Party. Known for his chaste Hindi and political connections, Amar Singh polarises the public opinion on him. He has several cases of corruption pending against him making him widely unpopular., He was the general secretary of the Samajwadi Party

Sammir Dattani also known as Dhyan (in Kannada film industry) is an Indian film actor who acts in Bollywood and Kannada films. Sammir belongs to a industrialist business family and was born and brought up in Mumbai. He did his schooling at Greenlawns and graduated from H.R college. Before turning to acting.

Nand Kishore Singh (N. K. Singh) (born 27 January 1941) is a politician, economist and former Indian Administrative Service officer. He is currently a Member of Parliament in the Rajya Sabha. He belongs to the 1964 Bihar cadre. N. K. Singh was born in Calcutta to Sir T. P. Singh, who served as country's finance secretary. His mother has been a former parliamentarian.

Titumir (1782 – 1831) was a rebel against the Zamindars and British colonial system in 19th century Bengal, a part of British India. He rebelled against them and put up an armed resistance. Along with his followers, he built a Bamboo fort (Bansher-Kella in Bengali) which passed into Bengali folk legend. After the storming of the fort by British soldiers.

Michael Craig (born Michael Francis Gregson; 27 January 1928) is a British actor and scriptwriter, known for his work in film and television in both the United Kingdom and Australia. Craig was born in Poona, Maharashtra, British India, the son of Donald Gregson, a captain in the 3rd Indian Cavalry. He came to England with his family when aged three, and went to Canada when he was ten.

Justice Radha Binod Pal (27 January 1886 – 10 January 1967) was an Indian jurist. He was the Indian member appointed to the International Military Tribunal for the Far East's trials of Japanese war crimes committed during the second World War. Among all the judges of the tribunal, he was the only one who submitted a judgment which insisted all defendants were not guilty.

Arati Ankalikar-Tikekar (born January 27, 1963) is a noted Indian classical music vocalist and a world renowned classical singer. She has received training in Agra as well as Gwalior-Atrauli gharanas. Endowed with a rich resonant voice, Arati's performances are marked by an excellent command over both the rhythm and the melody. She is best known for her albums such as Tejomay Nadbrahm and Raag-Rang.

Bharat Chipli (Born 27 January 1983 in Sagar, Shimoga, Karnataka) is an Indian cricketer who plays for Karnataka in first-class cricket. He is married to Shruthi Shetty, who is a HR Lead with an IT consulting giant. He studied at BHS College, Jayanagar, Bangalore. He plays for Swastic Union Cricket Club (I) in the KSCA Group, I Division.

Abul Hashim (1905–1974) was a politician. He was born in the village of Kashiara in Burdwan district of West Bengal. Hashim graduated from Burdwan Raj College in 1928, which was then affiliated with the University of Calcutta, and earned a law degree in 1931 from the same university. Then he started his law practice at the court of Burdwan.

Mahesh Kumar Kanodia (born January 27, 1937) was a member of the 14th Lok Sabha of India. He was representing the Patan constituency of Gujarat and is a member of the Bharatiya Janata Party. He is well known face in Gujarati cinema. His contribution in Gujarati Cinema has spread for around four decades. He has been very famous name for his music and singing.

Ishank Jaggi (born January 27, 1989) is an Indian cricketer. He is a right-handed batsman and a leg-break bowler who plays for Jharkhand. He was born in Bacheli.He was brought up in Jamshedpur and has completed his education from D.B.M.S English School Jamshedpur. Jaggi began his youth career playing with Bihar's Under-15s team, in the 2002-03 Polly Umrigar Trophy .

General James Blair VC CB (27 January 1828 – 18 January 1905) was a Scottish recipient of the Victoria Cross, the highest and most prestigious award for gallantry in the face of the enemy that can be awarded to British and Commonwealth forces. He was 29 years old, and a captain in the 2nd Bombay Light Cavalry, Bombay Army during the Indian Mutiny.

Mohammed Akrum Malik (born January 27, 1923) is a palmist and clairvoyant who has written three core books on palmistry and numerous articles in the field of occult sciences. He was born in Pakistan known as Jammu Kashmir. He did his schooling at Prince of Wales College at Jammu. Later he moved to Lahore where he enrolled in Masters in English Literature at F. C. College Lahore.