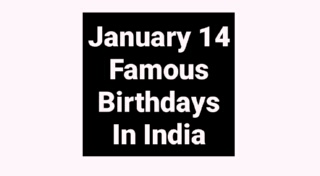 Seema Biswas (born 14 January 1965) is an Indian film and theatre actress from Assam who shot into prominence with the role of Phoolan Devi in Shekhar Kapur's film Bandit Queen (1994). She has a reputation for performing strong character roles. Biswas won the 1996 National Film Award for Best Actress for her role in the film Bandit Queen.

Durga Khote (January 14, 1905−September 22, 1991) was an Indian actress, starting as one of the foremost leading ladies of her times, she remained active in Hindi and Marathi cinema, as well as theatre, for over 50 years, starring in around 200 films and numerous theatre productions. In 2000, in a millennium issue, India Today named her among "100 People Who Shaped India,"

Kumar Ram Narain Karthikeyan born 14 January 1977, in Coimbatore) is the first Formula One motor racing driver from India. He has previously competed in A1GP, and the Le Mans Series. He made his Formula One debut in 2005 with the Jordan team, and was a Williams F1 test driver in 2006 and 2007.

Vikram Shankar Pandit (born 14 January 1957) is an Indian-born American banker. He is the chief executive of Citigroup, a position he has held since December 2007. He holds a B.S. and M.S. degree in Electrical Engineering from Columbia University, and an M.B.A. and Ph.D. in Finance from Columbia Business School. Pandit, a naturalized citizen of the United States.

Sobhan Babu (January 14, 1937 – March 20, 2008) was an Indian film actor in Telugu cinema. Born as Uppu Sobhana Chalapathi Rao to a middle-class family, Sobhan went on to become a romantic icon and was one of the top Tollywood heroes for two decades. He made his film debut with Daivabalam directed by Vasanthkumar Reddy, but his first film to hit the ... Read more at Wikipedia

Dr. Jayaprakash Narayan (born in 1956), known as JP, is a Indian politician, political reformer and columnist. He is the Founder and the President of Lok Satta Party and currently a Member of the Legislative Assembly from Kukatpally constituency in Andhra Pradesh, in south-east India. He is also a former Indian public administrator.

Mahasweta Devi (born 1926) is an Indian social activist and writer. Mahasweta Devi was born in 1926 in Dhaka, to literary parents in a Hindu Brahmin family. Her father Manish Ghatak was a well-known poet and novelist of the Kallol era, who used the pseudonym Jubanashwa. Noted filmmaker Ritwik Ghatak was the elder brother of Manish Ghatak.

Jandhyala Veera Venkata Durga Siva Subramanya Sastry (14 January 1951 - 19 June 2001) was an Indian film Screenwriter, Director and Actor from Telugu Cinema. He is revered as a Comic genius and has directed several successful comedy movies in Telugu. He has also introduced several comedy actors including Brahmanandam to the film industry. Jandhyala, popularly known as 'Hasya Brahma' Jandhyala,

Rao Gopal Rao (14 January 1937 — 13 August 1994) was a popular Tollywood Character actor and producer and member of Rajya Sabha. Rao Gopal Rao was born in 1937 in Ganganapalli near Kakinada, Andhra Pradesh. He started his career onstage, with his own company, Associated Amateur Drama Company and did many plays under the banner.

Sir Chintāman Dwārakānāth Deshmukh, CIE, ICS (14 January 1896 – 2 October 1982), better known as C. D. Deshmukh, was an Indian civil servant and the first Indian to be appointed as the Governor of the Reserve Bank of India in 1943 by the British Raj authorities. He subsequently served as the Finance Minister in the Union Cabinet (1950–1956).

Dronamraju Krishna Rao Ph.D (born January 14, 1937) is an Indian born Geneticist and currently President of Foundation for Genetic Research, Houston, USA. He was born in Pithapuram, in the state of Andhra Pradesh, India. He is the leading world expert on the research of the famous scientist and his late mentor, J. B. S. Haldane. He aims at promoting close cooperation between the USA and India.

Raghunath Dhondo Karve (January 14, 1882- October 14, 1953) was a professor of mathematics and a visionary social reformer from Maharashtra, India. He was a pioneer in initiating family planning and birth control for masses in Mumbai in 1921. Raghunath was the eldest son of Bharat Ratna Maharshi Dhondo Keshav Karve.

The Venerable Thomas Kurialacherry (January 14, 1873 – February 6, 1925) was a Catholic bishop, born in the Indian village of Champakulam. Kurialacherry was a member of the Syro-Malabar Catholic Church, and was the first bishop of what would become the Archdiocese of Changanassery, the largest Catholic Diocese in India. He also founded the Sisters of the Adoration of the Blessed Sacrament.

Abu-Al-Asar Hafeez Jalandhari Pakistani writer, poet and, above all, writer of the National Anthem of Pakistan. He was born in Jalandhar, Punjab, British India on January 14, 1900. After independence of Pakistan in 1947, Hafeez Jalandhari moved to Lahore. Hafeez made up for the lack of formal education with self-study.

Javur Jagadeeshappa Shobha (born 14 January 1978), is a professional female athlete from a village called Pashupathihaal near Dharwad in Karnataka. She currently resides in Secunderabad in Andhra Pradesh, India. She participated in the heptathlon and was the winner of the event at the inaugural Afro-Asian Games in 2003. Her personal best of 6211 points.

Nyapathi Subba Rao Pantulu (January 14, 1856–1940) was an Indian politician and social activist who served as a member of the Madras Legislative Council. between 1893 and 1909. He was also one of the founders of The Hindu. Pantulu was born in Nellore on January 14, 1856 but later moved to Rajahmundry. His father Veera Raghava Rao worked in the Customs Department(Salt Branch) in the Madras Government.

K. B. Tilak (14 January 1926 – 23 September 2010) was an Indian independence activist, film director and producer. His complete name is Korlipara Balagangadhara Tilak. He was born at Denduluru in West Godavari district, Andhra Pradesh on 14 January 1926. His parents are Korlipara Venkatadri and Subbamma. His paternal grandfather was Gangadharayya. His birth name was Balagangadhara Rao.

Subhav Sinha (born 14 January 1988, in Patna, Bihar) is an innovator who has developed a personal mobility battery operated vehicle called Personalised Mover - Mitra which was displayed at the 10th Auto Expo held at Pragati Maidan in New Delhi, INDIA. The vehicle is capable of carrying a single person which is considered to be useful particularly in airport corridors.

Chittaranjan Kolhatkar (14 January 1923 – 25 October 2009) was an Indian film and theatre actor. Born in 1923 in the Amravati district of Maharashtra, Kolhatkar began his film career in 1944, appearing in the film Garibanche Rajya. His theatre debut was in Bhavbandhan written by Ram Ganesh Gadkari. Politically, Kolhatkar was a firm supporter of the Hindu nationalist political ideology Hindutva.

Niharranjan Ray (14 January 1903 – 30 August 1981) was an Indian historian, well known for his works on history of art and Buddhism. he was born at Kayetgram village of Mymensingh District in Bengal province of British India (in the present-day Bangladesh). He completed his initial studies from the Mrityunjaya School and Ananda Mohan College in Mymensingh.