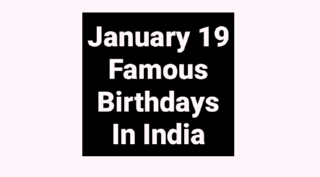 Rima Kallingal (born 19 January 1984) is an Indian model and film actress, predominantly appearing in Malayalam cinema. After being named First Runner Up in the Miss Kerala 2008 contest, she went to pursue a career in acting. She made her film debut in 2009 through the film Ritu, later appeared in Neelathaamara (2009) and continues to work in Malayalam and Tamil films.

Soumitra Chatterjee or Soumitra Chattopadhyay (born 19 January 1935) is an iconic Bengali actor from India, known among other things for his frequent collaborations with the great Bengali film director Satyajit Ray and his constant comparison with the Bengali screen idol Uttam Kumar. Soumitra was born in Krishnanagar in West Bengal, 100 km from Calcutta, in 1935.

Kaifi Azmi (January 14, 1919 - May 10, 2002) was an Indian Urdu poet. He is considered to be one of the greatest Urdu poets of 20th century. Together with Pirzada Qasim, Jon Eliya and many others he participated in many memorable mushairas of 20th century. Kaifi Azmi was born in a village Mizwaa(n) phoolpur, in Azamgarh, Uttar Pradesh, India.

Anjan Dutt (Born 19 January 1953) is a popular singer- songwriter of the 1990s Bengali music scene defined by anyodharar gaan (alternative songs). Anjan Dutt's style of music is different from the others in the sense that it has simple tunes, one that is reminiscent of western folk music. His lyrics are simple and more natural. Anjan's music is somewhat influenced by blues, bluegrass, folk.

Karun Chandhok (born January 19, 1984 in Madras) is an Indian racing driver, who competed for Hispania Racing in Formula One in 2010. Before this, he drove in the GP2 Series for three years, winning two races. Prior to his time in GP2, Chandhok won the Formula Asia championship in 2001 and was the inaugural Formula Asia V6 by Renault champion in 2006.

Vishnu Sakharam Khandekar (January 19, 1898 – September 2, 1976) (V. S. Sakharam Khandekar) was an eminent Marathi writer from Maharashtra, India. Khandekar was born in Sangli, Maharashtra. His father was a munsif in Sangli principality. In his early life, he was interested in acting in dramas and staged several dramas in his school days.

K. Subrahmanyam (19 January 1929 – 2 February 2011) was a prominent international strategic affairs analyst, journalist and former Indian civil servant. Considered a proponent of Realpolitik, Subrahmanyam has long been an influential voice in Indian security affairs. He was most often referred to as the doyen of India's strategic affairs community.

Sirkazhi Govindarajan (January 19, 1933 - March 24, 1988) was a leading vocalist in Carnatic Music. Govindarajan, born in Sirkali in Madras Presidency) and started performing at the age of eight in Tirupurasundari Temple. His son Sirkazhi G. Sivachidambaram is also a Carnatic singer. He graduated from the Tamil Isai College in Chennai in 1949.

Choor Singh Sidhu (19 January 1911 – 31 March 2009), known Careerally as Choor Singh, was a judge of the Supreme Court of Singapore and, particularly after his retirement from the bench, a philanthropist and writer of books about Sikhism. Born to a family of modest means in Punjab, India, he came to Singapore at four years of age.

Vinayak Damodar Karnataki(19 Jan 1906 - 19 Aug 1947) commonly referred to as Master Vinayak was an Indian actor and film director. Born in Kolhapur, Maharashtra, India, Master Vinayak was related to quite a few relatives in Film Industry which had strong presence in Kolhapur. His brother Vasudev Karnataki became an cinematographer.

V. E. Christopher was the Moderator / Bishop of India's largest Lutheran Church, the Andhra Evangelical Lutheran Church. Ernest Christopher was born into a pastoral family in Bhimavaram in Andhra Pradesh to Rev. Vardanapu Krupadas and Smt. Bhagyamma. His father, Rev. V. Krupadas was a pastor of the AELC. He had his schooling in Bhimavaram and collegiate education in Rajahmundry.


Joseph Cordeiro
Joseph Marie Anthony Cordeiro (January 19, 1918, Bombay, British India — February 11, 1994, Karachi, Pakistan) was the first Pakistani cardinal. He was born to Dr. Peter and Elvine Cordeiro who were of Goan origin in Bombay. He was educated at St Patrick's High School, Karachi, the University of Bombay and Oxford University. He received his religious training at the Papal Seminary in Kandy.

D. S. Satyaranjan is a Pastor, a New Testament Scholar, and an Administrator. Satyaranjan was born on January 19, 1939 in West Godavari district, Andhra Pradesh, India After completing his schooling and college education, he secured a B.A. degree through the Andhra University in 1959. Satyaranjan was interested in pursuing divinity and left for Serampore College, West Bengal.