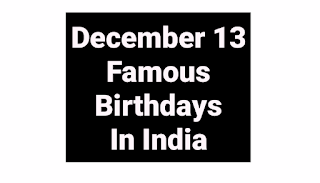 In this post you will know today's famous birthday personality in India like Bollywood actor, actress, cricketer, politician.


Daggubati Venkatesh is an Indian film actor who stars in Tollywood films. He is often credited as Victory Venkatesh in films and is one of the lead actors in Telugu Cinema. He has won seven Nandi Awards and four Filmfare Awards South. Venkatesh was born to prolific film producer and former MP, Dr. Ramanaidu Daggubati and Rajeshwari in Chennai.


Lakshmi Narayan (born Lakshmi Yaragudipati on 13 December 1952) is an Indian National Film Award winning actress known for her works in South Indian Cinema. Lakshmi has acted in more than 300 films in all south Indian languages apart from few in Bollywood. She has won a Filmfare Best Actress Award and eight Filmfare Awards South. Lakshmi was born to Yaragudipati Varada Rao, originally from Nellore


Swastika Mukherjee (born 13 December 1980 in Kolkata) is a Bengali actress at Tollywood. She is daughter of actor Santu Mukherjee. Mukherjee's first stint with acting was the tele-serial Devdasi. She made her film debut in 2003 with the film Hemanter Pakhi directed by Urmi Chakraborty. Her first lead role came with Ravi Kinnagi-directed Mastan.


Manohar Gopalkrishna Prabhu Parrikar (born 13 December 1955, Mapusa, Goa) is an Indian politician and is the current Chief Minister of the state of Goa, from 9 March 2012. He completed his secondary education in Marathi and went on to graduate in metallurgical engineering from IIT Bombay in 1978. He is the first IIT graduate to become the Chief Minister.


Jassi Sidhu (b.1978, Birmingham, West Midlands, England) is a Bhangra singer and the former lead singer of British Indian bhangra band B21. He split from the group, declaring that they would "never, ever reconcile" and that "(B21 was) nothing more than a glorified mime act", quoting differences between himself and Bally Jagpal. He has released three solo albums to date.


Ajay Ratra  pronunciation (born December 13, 1981 in Faridabad) is an Indian cricketer. He is a right-handed batsman and wicketkeeper. Ratra was selected in 2000 for the first intake of the National Cricket Academy in Bangalore. When Ratra made an innings of 115 not out in 2002 against the West Indies, he was the youngest wicketkeeper to make a century in Tests.


Shibram Chakrabarty (13 December 1903 - 28 August 1980) was a popular Bengali writer, humorist and revolutionary who is best known for his humorous stories. His best known short stories and novels are renowned for their unique use of pun, alliteration, play of words and ironic humor. He was a prolific author who also wrote poems, plays.


Mar Jacob Thoomkuzhy is the second Metropolitan Archbishop of the Syro-Malabar Catholic Archdiocese of Thrissur in India. He was born at Vilakumadam in the Eparchy of Palai on December 13, 1930.


Ramakanta Rath (born 13 December 1934) is one of the most renowned modernist poets in the Oriya literature. Heavily influenced by the poets such as T. S. Eliot and Ezra Pound, Rath experimented greatly with form and style. The quest for the mystical, the riddles of life and death, the inner solitude of individual selves, and subservience to material needs and carnal desires.


Basangouda Ramangouda Patil Yatnal (born December 13, 1963) is a former Minister of State, Textiles in Third Vajpayee Ministry from 1 July 2002 to 8 Sept 2003. He was also a Minister of State, Railways from 8 Sept 2003 to 16 May 2004. He represented the Bijapur constituency of Karnataka in 13th Lok Sabha and 14th Lok Sabha of India and was a member of the Bharatiya Janata Party (BJP) political par.


Dhanashree Halbe (born December 13, 1928) is a well-known Marathi writer. She is also translator, poet and a writer for children's stories. She has written more than 15 books, hundreds of short stories and articles for various age groups. She has translated 10 books from Malayalam to Marathi. She has also contributed to the "Encyclopedia on Women's Literature in Indian Language.


Singer and songwriter who at the age of 18 became the youngest solo artist to write and record a #1 hit on the U.S. Hot Country Songs chart with the single "Our Song.


TikTok creator whose popular lip sync videos have earned him over 1.8 million followers on the app. His siblings are well-known social stars and models Cash Baker and Lani Lynn Baker.